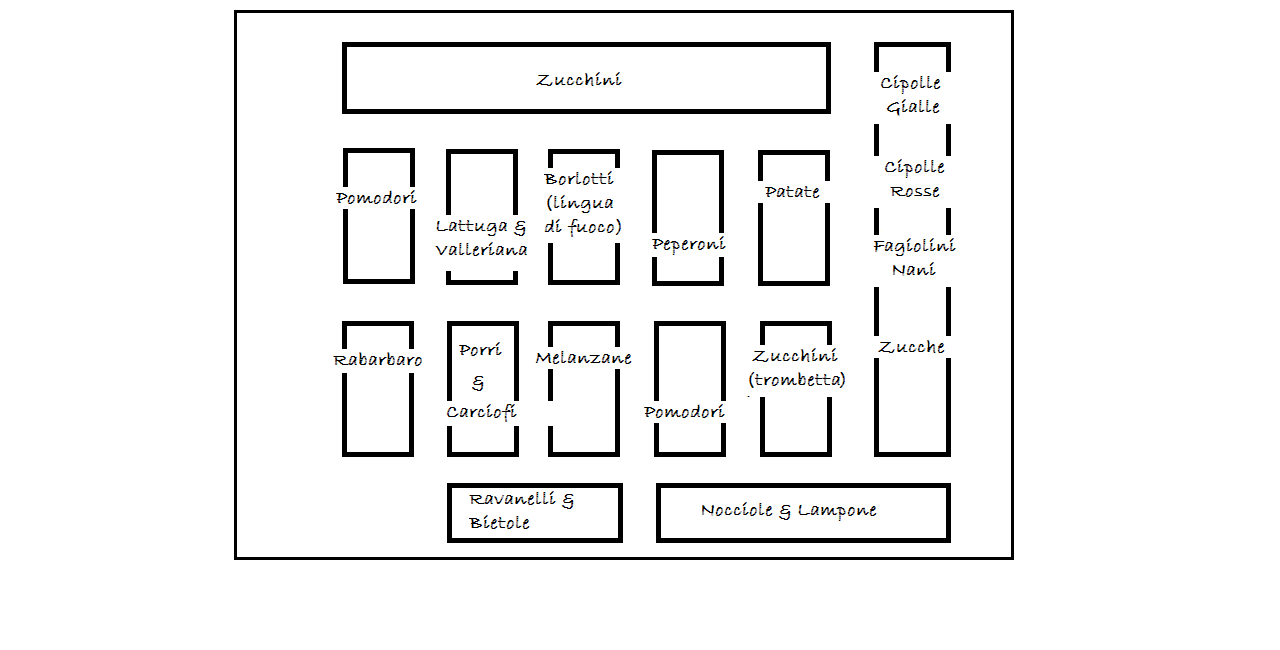 The ‘orto’ is finally finished – fourteen, metre-wide beds, totalling 42 metres in length, all dug over to a spades depth. Every muscle I used for that digging flinches whenever I go anywhere near the tool shed now … how’s that for muscle memory! Everything is growing well, apart from the lettuces and valleriana but I’ve hopes for a late growth spurt from them (but at only 99 cents a bag from the local supermarket I’m not going to lose any sleep). I can finally sit back and wait for the fruits (or veggies) of our labour to flourish with just a daily inspection as I water everything on an evening once the sun has disappeared.

We’re killing two birds with one stone as I water because every drop that comes out of the hosepipe is gradually emptying the well ready for cleaning. We’ve carried a 1,000 litre ‘serbatoio’ up to the top of the field behind the house so we get a good water pressure in the ‘orto’, and piped the tank to our well so that we can fill it at the flick of a switch. This in turn empties the well a little so we can eventually see what wonders (or horrors) lie at the bottom of this 9 metre deep hole and determine how we go about cleaning the thing so we can ensure it is refilled ‘bacteria-free’ for Winter. And because the water is a lovely shade of green at the moment, we can see from down in the garden where the level is in the ‘serbatoio’ without having to climb the hill behind the house to check every time … isn’t Mother Nature clever? 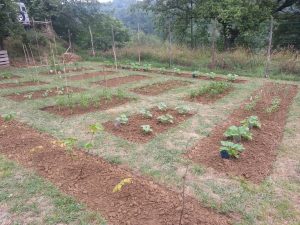 As you can see from the photo, we’ve not created a typical Italian ‘orto’ – we’re missing the black plastic sheeting on the ground and the blue leaves from the greenfly spray that the Italians usually insist on. Our friends who have seen it call it a ‘giardino di verdura’ – quite literally a garden of vegetables, and we’ve even been offered the word ‘scultura’ or sculpture after emailing a photo to a friend further afield! Our plastic bottles sunk into the ground to water the roots of the thirstier plants such as the courgettes and pumpkins have had a mixed reaction. Some people think it’s a great idea, never been done before, ground-breaking … others think I’m out of my mind and should remove them all immediately and dig big holes around the root ball to empty a watering can into instead. 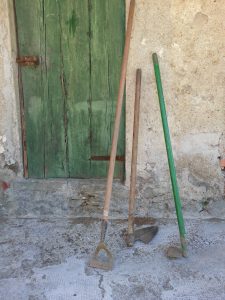 As always, the Italians are very hands-on when they are trying to explain something to us … especially something as important as ‘orto’ maintenance. One friend, who was just dropping us off after an evening together and happened to wander over to our vegetable garden insisted that I got her a hoe from our shed so she could show me exactly how to make this watering hole – this was at nearly ten o’clock at night! In fact she was then very specific about the hoe – neither of the ones I first pulled out that we’d brought from England were acceptable, luckily I then found one of the ones left to us by the owner of the house – Phew! She then went up and down the ‘zucchini’ bed in the quickly fading light, digging great trenches around the root balls before her husband convinced her to finally leave me to it. I’ve since filled these holes in and replaced them with the plastic bottles – but don’t worry, she’s one of the ones who approves of this!

We also have an old guy who passes our house regularly and always has some advice to give … whatever project we are on with that day … and he is harmless enough as long as we speak to him and listen to his advice outside of our garden – preferably on the road – preferably whilst he is still in his car with the engine running and the window just cracked. He prefers to use his hands to explain things, rather than his words, and we have to be quick to stop him when he pulls his secateurs out of his pocket – we need to learn the Italian for ‘Hand them over!’ before we let him anywhere near our garden.

Even one of our ‘geometre’ who were here the other day, took an interest in our ‘new fangled layout’ and after a brief walk around the garden, she was on her knees next to one of the tomato beds, nipping out tops and pulling off old leaves before I could stop her. 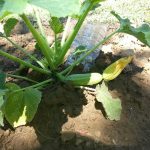 However, despite our weird and wonderful English vegetable garden eccentricities, we’ve already had our first harvest – and I do call one radish a harvest! The ‘zucchini’ are starting to form, green beans are appearing and the beetroot and tomatoes are all taking shape. So even though we were a little late in putting everything in the ground, the warmer soil temperature and odd thunder shower is perfect for some quick growth … and when everyone else is mourning the demise of their ‘zucchini’ plants and are resorting to alternatives from the local shop once again – we hope to still be revelling in fresh ‘zucchini’ with their fried, ricotta stuffed flowers. 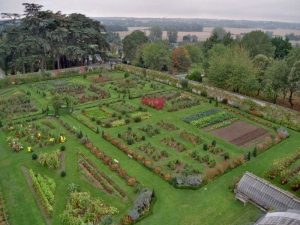 But next year is already on my mind – the plant list is growing every day so I think we’ll be preparing more beds before this year is out (sorry muscles). I’m learning a lot more about what to plant when, and with the fencing already in place we should be able to get on top of things a lot earlier next year. I’m slowly making my way through the ‘Calendario Lunare’ book with a dictionary to hand (I immediately read that I’ve planted my leeks during a waxing moon instead of a waning moon … not sure whether that means they won’t grow at all or I’ll get some weird mutated things the size of a tree but totally inedible) and I’ve got a very grand idea of what next year’s garden will look like once everything is planted up and growing – can’t wait to hear the comments from the neighbours!