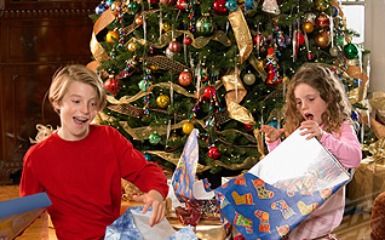 I know we’re coming up to Christmas and it’s a time associated with children and what will be under the Christmas tree from Santa Claus, but we’ve been lucky to have been offered some toys of our own for the festive season, and we’ve been having some fun! 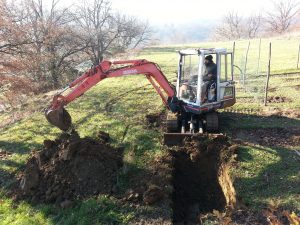 Firstly one of our Italian friends has a ‘scavatore’ (excavator) … it’s a little bigger than the one we’d thought about hiring, but with nothing planned for any Winter jobs he happily handed us the keys. All we had to do was organise for a lorry to collect it, squeeze this huge lorry down our narrow road, unload it without causing traffic chaos (I jest … we didn’t see a single car) then drive the ‘scavatore’ up the steep grassy incline into our field without tippling backwards. Marcus was up and running after just a quick 5 minute refresher, even though it’s been six years since he dug the foundations for our home in England. The great thing about an excavator though is, because there’s only one seat, it isn’t a left or right hand drive and because he’s only using it on our land it doesn’t matter which side of the field he’s driving on! 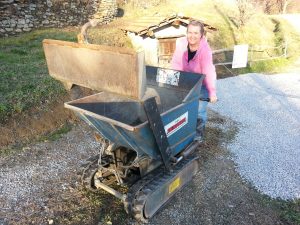 And to make sure that I wasn’t sulking in the corner all Christmas with nothing to play with, I have received the loan of a motorised wheelbarrow, from another friend, which Marcus collected on a trailer borrowed from that same friend. Both of these items will be with us for most of the coming few months and the trailer has already come in very handy as we collected our ‘fossa’ (septic tank) and its matching ‘degrassatore’ (degreasing unit) from a large DIY store at Genova only the other day and I’m sure there are other bulky items we’ll be needing as the weeks go by. One of the many attributes of the Italians we’ve found is their unending generosity and we seem to be on the receiving end of a lot of the stuff at the moment. 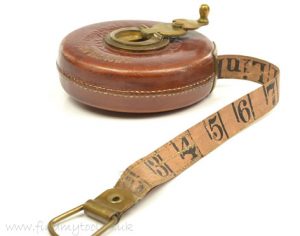 But our biggest gift came when our ‘geometra’ called at the house a couple of days ago to confirm exactly where we were wanting to dig the trench for our ‘fossa biologica’ – now that we had all the machines required, this job has jumped up the list a little … we made a choice – working toilet or warm house. The working toilet won but when we’ve finished that job, the flue and the chimney stack materials are sitting there ready and waiting!

Our geometra had been looking at the drawings and said we could maybe dig a shorter trench than the 23 metres we’d been told originally. He suggested that as there was only the two of us in the house, and the trench designed by the ‘geologo’ was for at least a household of five (determined by the number of bedrooms on the finished project), we could reduce the length of the trench now and add to it in later years if needs be. ‘So what length do you suggest we could start with’ we asked in our best Italian, ‘… 6 or 8 metres’ came his reply. After questioning the number to make sure we’d heard correctly, and being sorely tempted to ask him to write it down … and sign it in triplicate … I think I may have spent the rest of the conversation grinning inanely!

When they’d left and we’d finished our Oh-my-God-that’s-fantastic-news-dance, we were chatting about the work and agreed that we’d still do a good size trench but certainly well under 23 metres long. I said to Marcus ‘I can’t believe that we can halve our trench, which halves the amount of soil we need to find room for, halves our gravel deliveries by 30 tonnes and halves our costs. 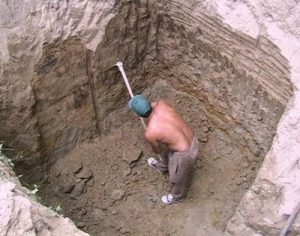 Marcus responded ‘I can’t believe I could have dug the blooming thing by hand!’