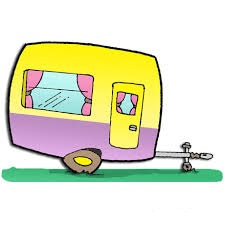 I love my caravan – our apartment on wheels. With there just being the two of us and our little cat, there’s ample room … well, once we’d made the adjustment from living in a four bedroom detached house with three bathrooms! I mean what’s not to love –

We can park up and ‘live’ in beautiful places that we would not be able to afford if we were renting or buying …. and if we decided at any point that we didn’t like the neighbours, we can just hitch up and drive off to somewhere new.

The cleaning of the whole place takes fifteen minutes or less – bathroom, dusting, hoovering AND windows.

And if you can’t be bothered getting out of bed on a morning for a cup of tea, you can pretty much reach to put the kettle on without totally leaving the warmth of the duvet.

But there are downsides … and not just the obvious things like emptying the loo every couple of days or watching a film on full volume as soon as the first few raindrops hit the roof.

Wrestling a king-size duvet into a king-size duvet cover isn’t an easy task in a standard sized room but you make that room ‘bed-sized’ and bring the ceiling down a couple of feet then you’ve got a real fight on your hands, and usually bruises on your knuckles by the time you’ve finished … and by finished I mean given up!

Hairdryers can only be used when in a sitting position, otherwise you risk putting a hole in the ceiling (although that may help the duvet-stuffing situation!)

An ice box in a fridge is no real substitute for a double freezer … and when you want ice, in Summer when it’s hot, then the ice box never stays cold enough so you’ll only ever get a tray of cold-ish water. The ice is only available in Winter when you can just fit a bag of peas and two small salmon fillets inside due to the huge mound of ice that has quickly grown attached to the back of the ice box of its own accord – overnight.

A full roast chicken is a thing of the past – for two reasons – the first is that the oven is not what I would call ‘ample’ in its dimensions so it needs to be either a very small chicken (we’ll call it a quail) or just two drumsticks. The second is that whatever the recommended cooking time is stated in the recipe, you need to double it … or triple it if you want it cooked through AND hot.

Showers are not to be long affairs as there is sufficient hot water for just two quick shampoos and some conditioner before the cold water starts making an appearance … although this only applies to me as my shaved-headed husband says he manages fine. Unfortunately I’m not prepared to shave my head so I’ll stick with a cool rinse and grit my teeth – it’s supposed to be good for the circulation isn’t it! Ooh, and I’m dreaming of the day I can have a shower without having to hold a trigger to make the water come out of the shower nozzle.

But despite my little moans (and odd large tantrum – usually about the kitchen when I’ve dropped something messy on the sofa because the 1 foot square work surface wasn’t sufficient for what I was preparing!) it’s done us proud over the last couple of years, and has got us to the position we are at now. Its next role will be as small country cottage/site office/wildlife hide as we tackle the job of creating a new home for ourselves … we have loads of ideas and the designs are appearing thick and fast on various scraps of paper but there’s one design we’re agreed on … this house won’t have wheels!