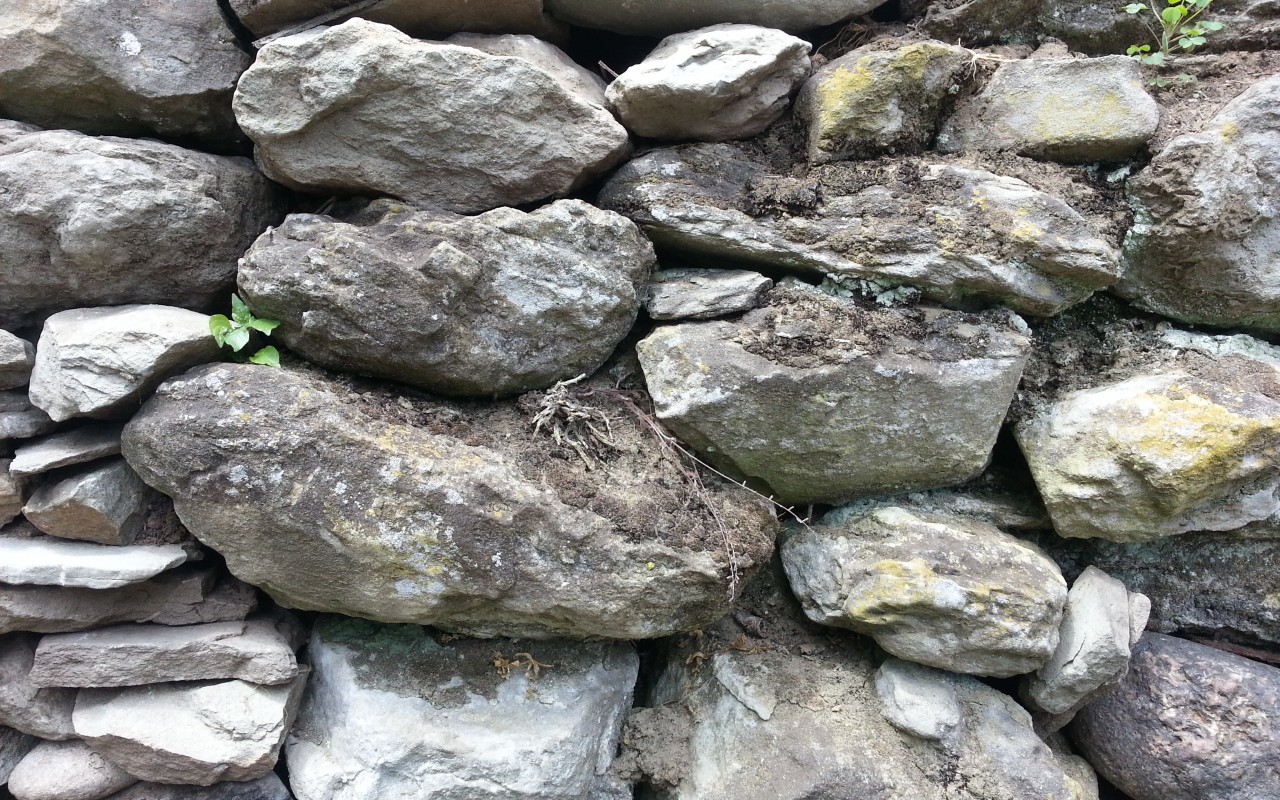 Well the first two months in our home in Italy have flown by … and what have we spent most of our time doing whilst we’ve been here? Building dry stone walls, of course. It’s true, we’ve built loads of them – and why not, when every inch of soil that we’ve dug into contains at least three or four rocks or slabs … it certainly saves a trip to the local builders’ merchant for materials! It started off as a bit of tidying up – there is a garden wall near the house that had been completely destroyed over time and so we reinstated that with the stones that were lying around the base, covered in years of soil. This has given us a large soil bed, yet to be planted up, but meanwhile is home to a couple of healthy old grapevines that we re-supported on a new (using old timbers) pergola. 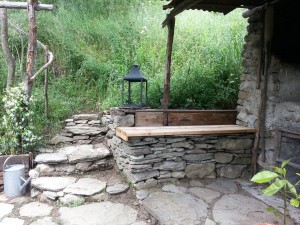 The next ‘treasure’ we unearthed was when levelling a short run of banking that led up into the hill behind the wood oven. We uncovered flat stone after flat stone, probably an old ‘cortile’ or courtyard, so we pulled out what we could and repositioned them to create a patio on which to put a couple of chairs, somewhere to sit whilst we waited for our pizzas to cook. With an excess of stones once this floor was finished we turned our attention to creating a bench, and topped this with a couple of old scaffold boards to create a perch/preparation area for the oven. A few steps cut into the banking behind gave us easier access to our top field, and we even added a twisted piece of wood as a banister giving us a ‘grand’ staircase’ – very Downton Abbey (if Downton Abbey was set in a field because they had no money!)

Then onto the ‘fienile’ – a pile of left over bric-a-brac from the previous owner stood in front of this building (half a ‘stufa’, a couple of bags of animal feed, some concrete pipes) which covered an even bigger pile of gravel which, when levelled out, would create a fabulous flat base … maybe a future terrace for an early morning coffee. But how to retain it? Stone wall number three was born and edged the area nicely. The morning coffee idea is yet to materialise, but the lizards seem to like using it as their sun terrace so all our hard work was not in vain.

Wall number four appeared when we were levelling off an area at the top of the steps to our ‘orto’. Once again, two or three spadefuls of soil in, and we hit stone. And not just a couple of small pieces either. We think we found the original perimeter wall to the previously mentioned ‘cortile’ so these pieces of stone were large enough to warrant two of us on the job to dig them out. We reinstated them alongside the caravan, giving us a small border alongside our ‘current home’ and the beautifully level path we originally intended to our ‘orto’ steps. By now Marcus was suspecting that we were somehow attuned to how the house and garden had been laid out over 100 years ago, and were in fact rebuilding the whole thing in its entirety a couple of inches higher than it was originally! 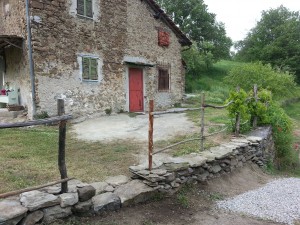 Wall number five was originally going to be an addition to the old fencing we’d already put around the entrance to the land. We wanted to isolate the garden from the driveway, giving us a more dedicated relaxing space, but with the garden level dropping away, we needed to build a short run of wall on which to sit the fence. Completed easily in an afternoon’s work (come on … we’re on wall number five now … we could do these in our sleep!), Marcus even added a step before finishing the fence. So we now have a separate driveway running past the front of the house, a turning space at the end, and then a separately fenced off garden area – somewhere to laze on our sun loungers – if only we could find a flat piece of grass to put them on.

Which brought us nicely onto wall number six. We needed to level the grass area but had a long run of an ugly soil banking on one side and a lot of lumps and hollows to contend with. In fact the area we wanted for our lawn (… we still embrace some aspects of England …) was mainly clover, stone, old roof tiles and bare soil. Our walnut tree stands in the perfect position to create shade around noon so my idea of sitting outside for lunch on a sunny day, shaded by this tree, a table laden with Italian antipasti and a couple of bottles of red was a bit of a pipe dream whilst ever our grassy area was more suitable as a motocross circuit than a croquet lawn. Maybe that’s why there was an abundance of old roof tile pieces scattered around – because we were using them to prop up and level our chairs whenever we took a ten minute break! 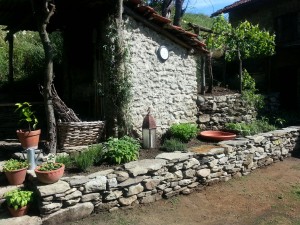 So two days began of hot work in the sunshine (the two hottest days of the year so far …) digging up the lumps and filling in the dips, raking, pulling out stones, medicine bottles and axe heads (the previous owner’s family seem to have been a very ill group of woodsmen judging by our findings!) We were left with a lovely flat area of soil, a large pile of stones and a box full for our next trip past one of the green bottle banks at the side of the road! The idea of a herb garden was born, we’d use up the stone rather than shifting it for shifting’s sake and I’d get a large bed to put all my herbs in. Another day later and we had an 8 metre by 1 metre wall, filled with soil and sparsely planted with my five existing herb plants. I’ve since added to these with some seeds I’d already potted up, and a chance discovery of an ‘agricola’ with racks and racks of plants outside completed the project!

Our final wall, was the one near the wood oven … again! Where I’d pinched the herb plants from was the edging to our little ‘pizza waiting’ area, and, with a few flat slabs left from the recently constructed wall, we decided to infill this now defunct herb bed with these remaining stones to create a larger sitting area – and whilst we were at it, we may have redone the step into my potting shed and added a couple more steps from the grass onto the terrace. And that’s it … it has to be, we’ve no stones left. But this week, I’m planting up one of the borders to our garden area – if I hit something solid with my trowel, we may need to start thinking of some more projects!