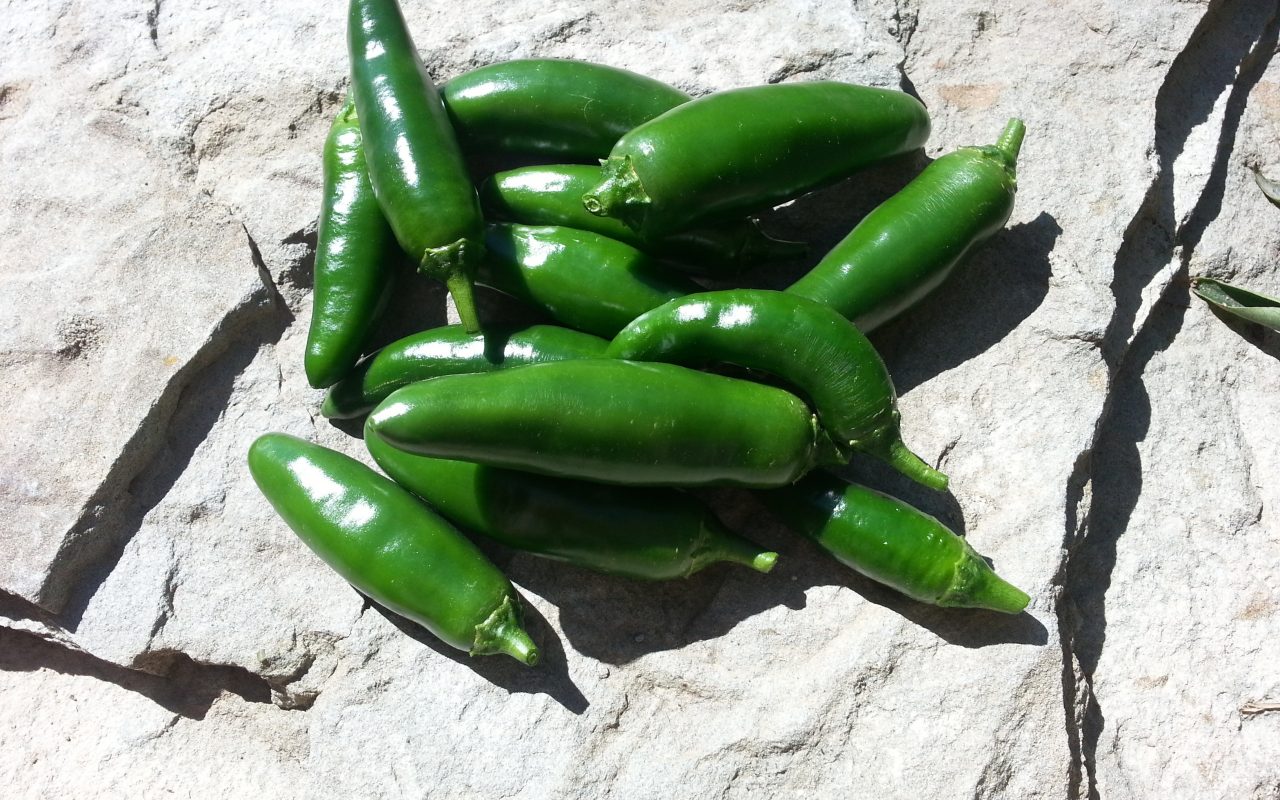 Yes today we have another Foodie Post – the ‘orto’ and the herb bed have certainly kept me busy this Summer and without wanting to resort to supermarket shopping over Winter we’ve been tucking a little something away every time we’ve had a rush of growth on our various plants. This week we’ve been picking … and pickling … our ‘peperoncini’.

The easiest one to tackle was our Bird’s Eye Chilli plant as these just needed plucking from their stems and deftly threading together with a needle and some cotton before being hung outside to dry on one of the many metal pegs hammered into the house wall – probably not their intended use but they suit this job perfectly! Once the sun had dried them to a crisp I unthreaded them and put them in a pretty jar on the makeshift shelves (3 large sturdy boxes from Lidl stacked on top of each other) in our cantina. However we have more thread and an empty jar on standby as our plant, once stripped of its fruits, has decided that we haven’t got enough to last us this year and is once again covered in green chillies.

We’d also treated ourselves, earlier in the year, to a couple of Jalapeno pepper plants from our local ‘agricola’ and, with a small jar running at almost 4 euros a piece from the supermarket, we needed to find a more economical version to enhance our Mexican evenings. I recently pickled my third jar of these as the plants have been prolific in their chilli production, and with the help of www.allrecipes.com I’ve found the perfect solution (pun definitely intended) to preserving these spicy peppers. 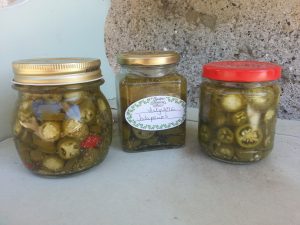 In a small pan, put ¾ cup of water, ¾ cup of apple vinegar, 3tbsps of sugar, 1tbsp of salt, 1 crushed clove of garlic and ½tsp of dried oregano and bring to the boil over a high heat. Add 10 jalapeno peppers sliced into rings (leave the seeds in for a fiery kick) and remove immediately from the heat, letting the mixture cool for ten minutes. Pack the peppers into a sterilised jar, cover with the vinegar, stick on a pretty label and put into your cool cantina, ready for the next chilli con carne or quesadillas session.

Finally it was time to tackle the ‘peperoncini tondi’ which were quickly turning red and which I was afraid of losing if I didn’t stock up on tuna and capers sharpish. We’ve bought jars of these stuffed ‘peperoncini’ before but the ones we like are from one particular shop which is now more than a 30 minutes’ drive away. I wanted to try making our own as they are delicious, but they looked a pig to prepare – hence the delay. But using a recipe that I found on www.ricette.giallozafferano and the ingredients finally bought we set about picking, trimming, scooping out seeds and pulp, not touching our eyes, washing, cooking and setting out to dry 25 red peperoncini. With a welcome overnight break as they dried, I made up the stuffing of tuna, anchovies and capers the following morning, whizzed it in the mixer and piled it into a piping bag, or in my case a freezer bag with the corner cut off – either way it has the fabulous Italian name of ‘saccapoche’, filling each ‘peperoncino’ to the brim. 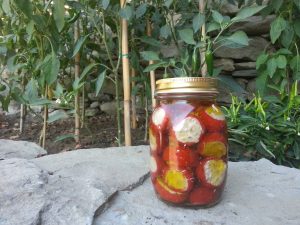 Finally I carefully placed them into a sterilised jar and topped it up with olive oil, hiding it behind a few other jars in the ‘cantina’ so we weren’t tempted to pick at them when we went in there for a bottle of water or something from the freezer. They look really good – hopefully they’ll taste as good as the bought version – but we’ll know next time we break out the ‘antipasti’.

And for all of you who are worried about sterilising jars to preserve your homemade jams and pickles – don’t be. Speaking from the tiniest kitchen, with no dishwasher and just a modest amount of hot water, it can be done easily. Just make sure the jars and lids are well washed, then boil them in a pan of water for ten minutes, and put in a very low oven to dry off. I love that when I’m on with another job and have forgotten about my filled jars – all of a sudden I hear a very satisfying ‘pop’ as the centre of the jar lid depresses as it cools. And if it doesn’t then I don’t panic, it’s not wasted. I just put that jar of pickles or jam in the fridge where it’ll keep for a couple of weeks at least – it’s a sign that I’ve worked hard and should enjoy the fruits of my labour immediately!