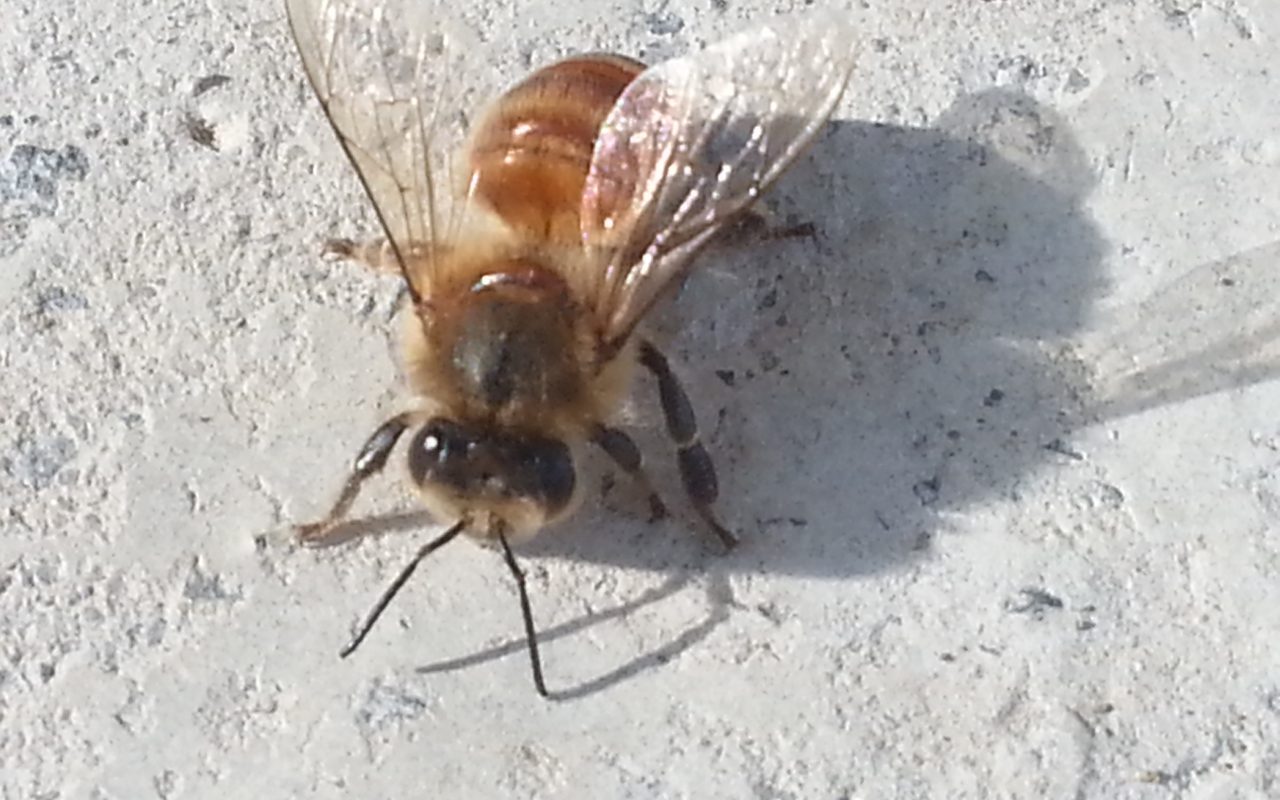 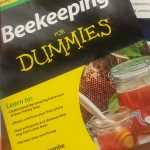 On Saturday, for no particular reason, a thought slipped into my head about the bees. I thought it was a shame that we’d bought the Beekeeping Book and had only dipped into the first few pages before tucking it away into a box in the house once we realised that we were severely lacking in bee movement after the Winter.

On Sunday we were enjoying a break from work in some very warm sunshine and, as we lazed on the loungers and looked up at the house, we saw a handful of bees hovering around the old crack in the wall where the door was filled in many years ago. We didn’t think too much of it as there are always a few solo bees around, looking for small holes in the house wall, but rarely do they hang out together like this little group. ‘Maybe the bees are back’ we said casually.

On Monday morning we were in the caravan when we heard a noise. It sounded similar to a motosega (chainsaw) or a decespugliatore (strimmer) which we do hear from time to time here due to the vast amount of greenery that surrounds us, but this noise was different, and sounded closer than usual. We wandered outside to have a better listen, but after just a few steps we knew exactly what it was … because we saw it! Despite the clear blue sky there was one grey cloud, at the corner of the house, and it was moving and buzzing. I don’t know how many bees were there but the property finder scouts from the previous day had obviously taken a liking to the crack in our wall and had returned with their extended family, distant cousins and friends of friends to move in. As we watched for a few minutes we could make out clusters of them landing on the house wall and, one by one, they all disappeared through the 2 inch gap until they were no more. 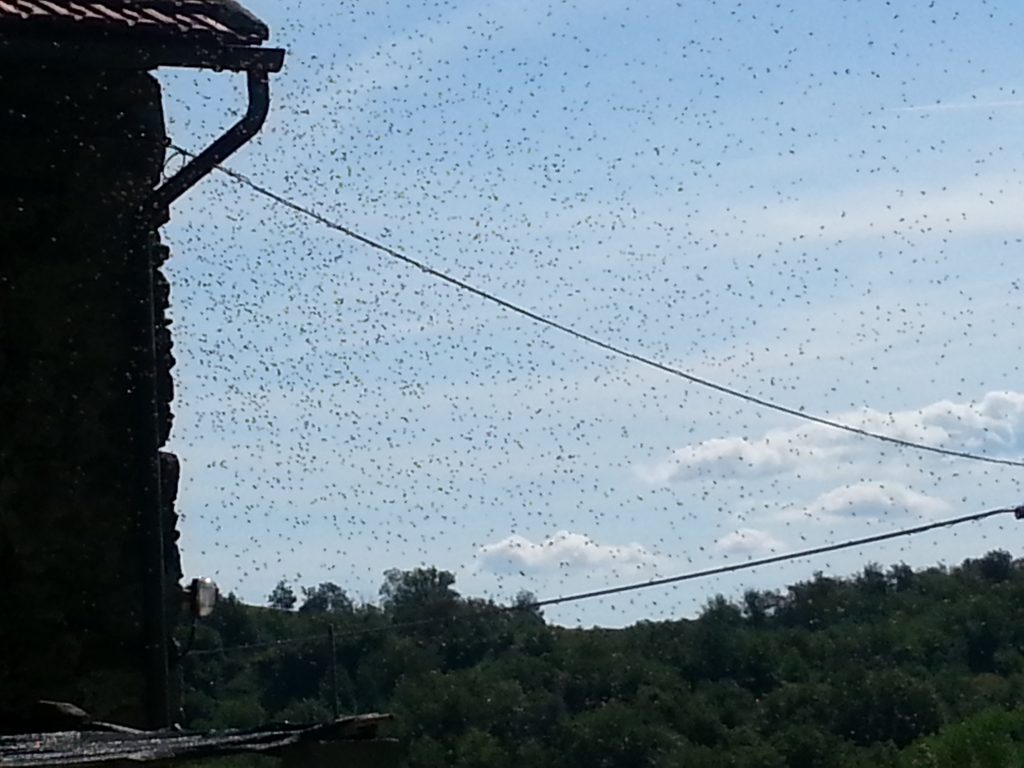 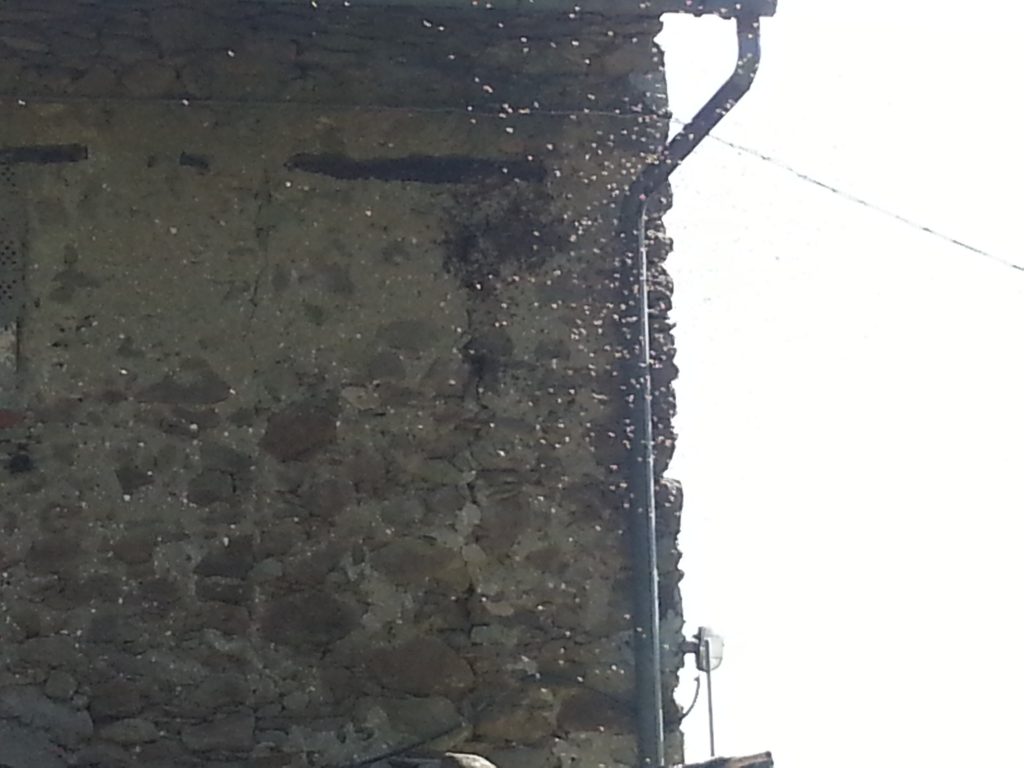 So we’re back where we were this time last year, living in harmony (or should that be ‘harm-honey’) with our furry winged friends. A few pop out when there’s sunshine to have a little fly around but they’re well out of our way. It feels a little different this year, knowing how many of them are inside the wall but it also seems more logical now that the thousands of them are in the house whilst there’s just the two of us in the caravan! 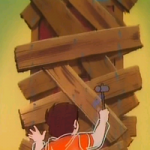 We know they’ll leave the nest after Winter and we can either capture them if we decide we truly are budding apiarists or let them leave if not. One thing we do need to do though is to block the entrance holes up when they’re gone, so the book may make another appearance later this year – even if it’s just to be nailed over the holes in the wall!