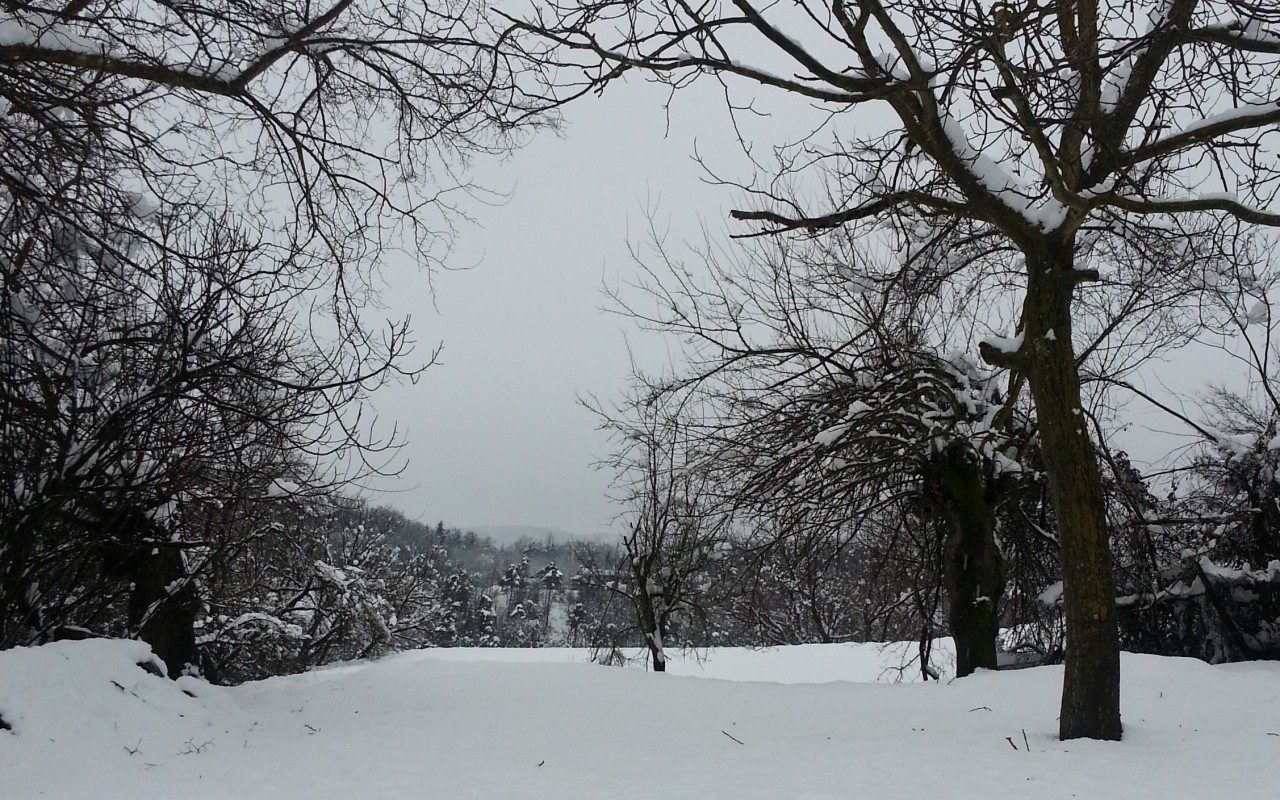 The Italians might moan about the weather as much as we English, but they definitely deal with it a lot better. Take this weekend for example – we’ve had snow. Well at the campsite we’ve had a constant 48 hours of heavy rain with an ‘allerta arancione’ (orange alert) on the digital boards along the coastal road and local rivers flowing at the fullest we’ve seen for over a year, but further inland it’s a different story. We headed up to the house on Sunday morning to see if there was the expected Winter Wonderland, and we weren’t disappointed.

At the top of the nearest hills, once we left the campsite, were the first signs of snow, with the white stuff covering the sides of the road – but only to about an inch depth. Our left turn into the hinterland and we were driving alongside covered fields up to 4 inches thick with snow but the road … both lanes … was clear. But I was preoccupied with the road to our house as it is only a single lane – without snow you have to be prepared to pull off-road for the odd tractor (rarely but always a possibility) and if there was snow on the road it would prove to be a little more difficult. But I needn’t have worried – at half past ten in the morning, the ‘spazzaneve’ had already been up and cleared the road completely, the drainage ditch alongside the tarmac taking the bulk of his ‘ploughings’ and the surrounding countryside looking beautiful, covered in around 8 – 10 inches of soft white snow.

We arrived at the house only having had one hold up on our journey … we’d had to stop to let a wandering ‘cinghiale’ cross the road in front of us … a very brave ‘cinghiale’ with it being, not only broad daylight, but a Sunday and therefore a hunting day. Or maybe he was a very wise ‘cinghiale’ who knew that when there’s snow on the ground, even on a hunting day, the hunters are not allowed to be out. I’m even thinking that he was taking the opportunity to stand at the side of the road singing ‘Nah nah na nah nah!’ at all the passing 4x4s that had their redundant hi-vis hunting jackets hanging over their passenger seats.

In England the consequences of the snowfall would have been a completely different story … at the first forecast of snow, the residents of the small cul-de-sac near our house would all bring their cars onto the main road in a chaotic group, to leave them there overnight for fear of not being able to get to work the next morning. As the first (and probably only) snowflake fell, the cars travelling on the main road on their morning commute would grind to a halt creating five mile long tail backs, and as the drivers sat in their cars, getting more and more frustrated, the gritter lorry would finally come past showering all of them with salt.

So I’m happy here with our Italian snowfall – taking my chances with jay-walking wildlife, jumping snow-filled ditches to get to our house, and enjoying the picturesque snow-covered countryside surrounding us, unspoilt by human footprints and brown slushy roadside snow … and just the welcome sound of the snow plough in the distance.