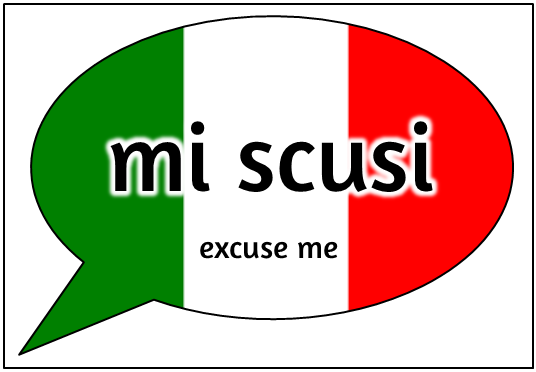 So there were we thinking we’d learnt the basics of the language and could expand on that over the next few months to learn perfect Italian through a mix of our ipod course and day to day conversations with the Italians. But it’s not that simple of course. Italian campsites not only have pitches for caravans, campers and tents of the ‘stranieri’, many of them also have bungalows (basically permanent caravans with a little wooden building attached) for the ‘permanente’, and the Italians who own these arrive every weekend and usually for a full month in Summer. Being based in Liguria we would be joined regularly by ‘permanente’ from Turin, Milan, Genoa … not a great distance away, but enough … and this is when we learned that our ‘perfect’ (I’m using the word loosely) Italian learned from a book and a listening course was not sufficient . It did not teach us about ‘i dialetti’ (the different dialects).

We have friends from Bruzolo in Piedmont, who speak Piedmontese, a sort of Italian and French mix, then there are our friends from Genoa, only forty minutes away but they, of course, speak Genovese, a real mix with Genoa being an old port so this blends English, Italian and Portuguese just for starters. The nearest city to us is Savona, who has its own language of Savonese and our neighbours, who are originally from the hinterland of Liguria, before the border to Piedmont, say that sometimes they struggle with some of the words in the local coastal town of Albisola where – you’ve guessed it – Albisolese exists. We joked that there was no point in us learning Italian yet, and we should find a house first, decide what ‘version’ of Italian was spoken in that area and then learn. Now that we’ve got the house we’ve found out that our local dialect is Deghese but fortunately all of the people we’ve met in the area speak ‘Italian’ so I think we’re OK!

Along with the different dialects, there’s also the ‘moda da dire’ (a saying) – these are phrases that every Italian uses many times each day without thinking and they don’t make any sense when we’ve done a quick word for word translation into English. We just stand there with blank faces until someone realises they’ve used one of these phrases and confirms it with ‘Ah si …. Una moda da dire’. Although I have an English friend who is married to an Italian and the other day she used the phrase ‘Whatever Trevor’ to which her husband replied ‘Qui è Trevor?’ (Who’s Trevor?) so I suppose it works both ways!

And then there’s the accent. No matter how well you think you are speaking, you’ll never do it like a true Italian. The words may be correct, the grammar perfect, the ‘Rrrs’ rolling perfectly off the tongue but the accent …! We were in a ‘gelateria’ (ice cream shop) and casually asked for a ‘gelato’ each when the lady behind the counter asked ‘Siete Inglese’ (Are you English?) ‘Si’ we replied, trying to keep the pretence going that we were English but how very astute of her to notice as we obviously were speaking ‘l’italiano’ so well … She asked us to say something else in Italian, so I started to speak but she said ‘No … lui’ pointing at Marcus. So Marcus obliged … she then kindly informed us that we sounded just like Stanlio e Ollio (Laurel and Hardy in Italian) which we searched for on Youtube at the next available opportunity – it was not a compliment. Go on … take a look …

Apparently it’s a trait of most English people that we extend the ‘o’ at the end of words a little too much making us sound very posh here – not an easy feat for Yorkshire folk! Ever since then we try and remember to flatten our ‘o’ sounds when we talk, but at least we can tell when someone thinks we sound strange now and we just reply ‘Stanlio e Ollio!’ which makes them smile. The thing that irked me most about that ‘gelateria’ visit was that, even after we performed our ‘Stanlio e Ollio’ tribute act, we still had to pay for our ice creams!

We’ve also had compliments on our English version of Italian. Marcus was sending a text once and our friend Anna was on hand so he asked her to check it first – she read it and started laughing saying she understood it but it wasn’t right but he must send it without changing a word as it was ‘carino’ (charming) – luckily it was one of her sons who would be the recipient of this atrocity of a message! And we were talking to another good friend about how frustrating it was for us not to get the pronunciation right and that we would never sound Italian. He replied that’s what makes us who we are ‘English people talking Italian’ and we should never try to get rid of that accent that defines that, although I suspect that he’s a huge Stanlio e Ollio fan and loves hearing us speak, purely for his own entertainment.

And then there’s the words themselves – there are a few that I get mixed up, even if I stop and think before they leave my lips – but with only one letter different, I’ve always argued that it’s very tricky. I’ll give you a couple of examples : peach is ‘pesca’ and fish is ‘pesce’ so I’m often found describing fish trees and catching peaches in the sea. I can scramble a grape ‘uva’ and make wine with an egg ‘uova’ and when my neighbour rang to see if I wanted a cabbage ‘cavolo’ I thought she was giving away her pony ‘cavallo’. However when we mentioned this confusion to our English friend’s Italian husband (whose English is exceptional by the way) he said ‘I don’t understand why you get them mixed up as they’re spelt differently’. This got me thinking of English equivalents, and he’s right – you wouldn’t see the son in the sky and attend your sun’s wedding, or fly an egg after you’ve swatted a fry. So I’m working on ways to help me remember the words I struggle with – although I started with ‘uova’ is egg and has an ‘o’ in it which stands for oval – but I immediately realised that grapes are the same shape, so that didn’t work!’

The other frustrating thing is the amount of words for the same thing … when someone says ‘Grazie’ (Thank you) I always replied with ‘Prego’ (You’re welcome) but I’ve since learned that you can say ‘Figurati’ or ‘Ci mancarebbe’ as well – I’m sure there are many more. You’d think that having a few options for each word would make speaking the language easier – if you struggle to remember a word, just pick one of the many others that exist! But it makes it harder to understand a conversation because the person you’re talking to has the same choice of words at their disposal. The other day I was talking to Bruno, our next door neighbour – we were having a conversation about ‘temporale’ (thunderstorms) and he was saying that he didn’t like lightning because when he was young, a chimney fell only a few feet in front of him, after it was hit. But he used a word I didn’t know … ‘una burrasca’ so I stopped him and said ‘Non ho capito’ (I don’t understand). He thought for a minute and then said ‘temporale’ … I hit him with my napkin and said ‘Perché non si utilizza la parole temporale!?’ (Then why didn’t you say ‘temporale!?) – I don’t go around hitting everyone I don’t understand with a napkin … just friends … and only when I have a napkin handy!

But despite our occasional language mishaps we are able to communicate far better than we ever thought possible. You know you’ve learned a lot when you can pass an hour or two with a group of Italians making idle chit-chat on the terrace … and if we drink enough Grappa throughout the evening our Italian gets much better, even if only in our opinion!