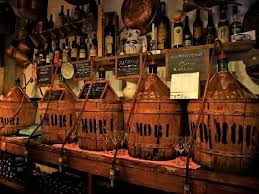 My ‘cantina’ is far from full (the photo above is the dream, sadly not the reality) – unless you count the various new ‘Quattro Stagioni’ and ‘Kilner’ jars that tempt me whenever I amble around Ipercoop (there’s always a new size or shape that I know I couldn’t live without – in England my obsession was handbags, in Italy its glass jars!) We’ve also started saving jars and bottles to put to one side for future preserves but that has just made me more awkward to supermarket shop with – if I buy anything in a jar now, I have to like the jar as well as the contents!

I still have a demi-john full of the undrinkable red wine that we inherited with the house but we’re not sure how long we should keep it until it becomes red wine vinegar. At the moment it doesn’t smell like anything that I would liberally drizzle over a fresh green salad and I remember reading something about a ‘mamma’ growing inside the liquid to form a solid layer, no sign of her yet, but whilst ever we have room for the demi-john and no desperate need for red wine vinegar, it shall stay in the corner gathering dust.

We, of course, have our various peppers – dried ‘peperoncini’, ‘peperoncini tondi’ stuffed with tuna and no fewer than three jars of pickled jalapenos. My bell peppers are sliced into strips and submersed in white wine vinegar and, for such a simple way of preserving, are absolutely delicious. I even made my own mint sauce, stripping a whole plant to make just a finger width depth of sauce in the bottom of what still looks like an empty jar. 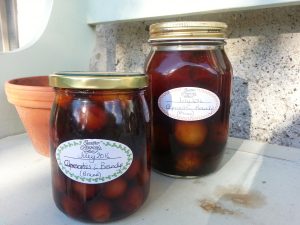 We’ve been given a couple of jars from some friends who I think had an excess of brandy in their own ‘cantina’ as we have a huge jar of apricots and a slightly smaller one of cherries soaked in the aforementioned liquor. They have Christmas written all over them but they might also have compost heap written on them, depending on what brandy they’ve used! I have also dabbled a little in the spirit world myself, creating a couple of drinks that are waiting in the shadows to mature. The first one came about when our peaches finally ripened but were immediately hit by a thunderstorm of heavy rain and hailstones so we lost the lot to the floor. The ones we were able to salvage were washed, de-stoned, chopped into chunks and put into one of my lovely ‘Quattro Stagioni’ jars to be drowned in vodka. I tip the jar a couple of times every morning just to keep everything mixed, and the liquid is turning a lovely golden colour. I don’t know whether I could call this a peach schnapps or whether it will just be a peach-flavoured vodka but it should be good. 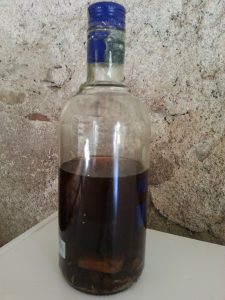 The rest of the bottle of vodka went towards a recipe I found on www.mumsnet.com for Christmas Pudding vodka … how could I not try that … I like Christmas, I like Pudding and I like vodka! In a large sterilised screw top bottle I put 500ml vodka, 2tbsp dark brown sugar, ½ cinnamon stick, 2 cloves, the peel from 1 orange and 1 lemon and 20g each of currants, raisins and dried figs. With the lid screwed on tightly this bottle has been sitting in my ‘cantina’ for about three weeks, being shaken occasionally to agitate the ingredients. It only has another week or so to mature so that technically makes it a Hallowe’en Pudding vodka, but it gives me plenty of time to try it, decide whether I like it and collect more of the relevant ingredients again to have it ready for Christmas if it gets the thumbs up. 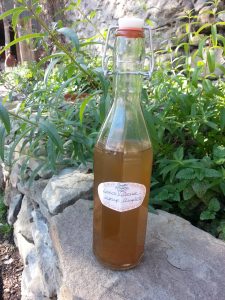 I’ve also tried my hand at cordials and syrups, given that we drink a lot of water throughout the day in Summer and it can get a bit boring. The first contribution to the non-alcoholic section of the ‘cantina’ was a lemon verbena syrup, the recipe courtesy of Hugh Fearnley-Whittingstall, not because I wanted a lemon verbena syrup, just that I had a lemon verbena plant which was threatening to take over my herb garden. I brought it down to size, literally, but still only just managed the 50g of leaves required for the recipe. This bottle has yet to be opened but apparently is also good brushed over cakes and splashed into fruit salads. 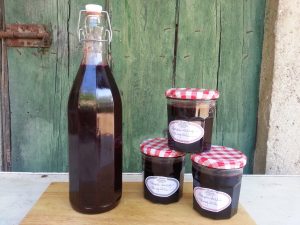 The other cordial that I made was a grape juice. A tedious recipe leaving my hands pink from picking each individual grape off its stem, my fingers pruny from dipping them in and out of the water where the grapes sat to be washed and my back aching from sitting in a grape picking and washing position for too long. There’s boiling and sieving and scraping and lots of purpleness, even an overnight straining session, all for a litre of juice that needs to be drunk within a week. Once the washing up was done and the pips and purple cleaned from every orifice of every pot and pan I’d used, I tried some and didn’t like it! Marcus did though so we managed another batch with the last of the grapes, doing the washing up outside this time with the hosepipe – cleaning up was definitely easier this way! However, I think that the time it took to make this I could have driven to Asda at Folkestone and back, returning with a case of Shloer … needless to say this recipe is not on my ‘to do’ list next year.

But I also made a grape jelly which is lovely (even though it is technically the same recipe as the grape juice, only with an extra step for the setting process, but it tastes so much nicer, and lasts longer!) There are two jars left in the ‘cantina’ along with a couple of mulberry as well – ready for those rounds of toast on a Winter’s evening with a mug of tea.

I know the joy of having a few homemade preserves in the ‘cantina’ will slowly diminish over the next few months as we gradually eat our way through them and I’m just left with an assortment of empty jars and bottles again, but there is a great pleasure to be had when you eat or drink something that you’ve grown, made from scratch and put into a corner of the room in its pretty labelled jar to mature until the time is just right to open it and sample its contents.

That is unless it’s grape juice.