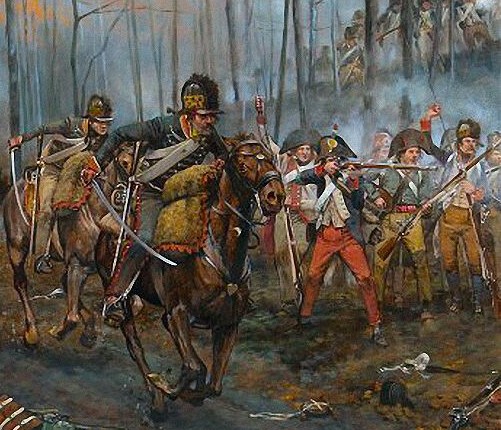 On the 14th April 1796, Napoleon and his troops, having already been victorious at Montenotte, simultaneously attacked the Austrians and Piedmontese to continue their campaign in Italy. The Austrians were holding their position at Dego but after suffering 350 casualties and 1,500 men being taken prisoner by the French they were forced out as the French moved in to pillage the small town. Whilst one of the two Generals was absent (possibility looting or being ‘entertained by a woman’), a second Austrian force arrived in Dego and on the 15th April drove the French back out. It took 600 French casualties and three more attacks that day before they reconquered the town and the Austrians withdrew to the north*. 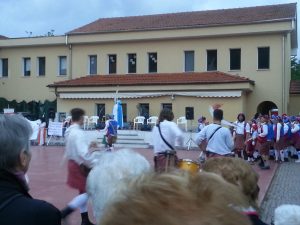 So why the history lesson? Well Summer in Italy means the ‘festa’ season has started in earnest so why not celebrate a historical event with a long weekend of food, music and a tug of war? We arrived at the ‘Festa in Piazza – edizione Napoleonica’ on the Saturday night in the town to catch the end of the parade of tug of war teams through the decorated main street – each team dressed up in fancy dress. There were cowboys and Indians, the Pope and his clergy, Austrians in lederhosen with blonde wigs, Sottish in tartan skirts and ginger wigs, and many more – we later learned that the Sottish had won the tug of war and they celebrated their victory with a drumming troupe and some very dodgy Scottish dancing in the main Piazza.

The Piazza was then transformed into a more civilised dance area as the music group for that night arranged themselves on the stage and couples eagerly arrived to join in the dancing. We eagerly left at this point – the dancing at these events is usually folk dancing, set pieces that we’ve yet to fathom out, and there’s always an accordion! Plus, in the Piazza next to the dancing were the ‘bancarelle’ – stalls of food and drink surrounding a large layout of tables and benches where people were already tucking into their choice of ‘cena’. 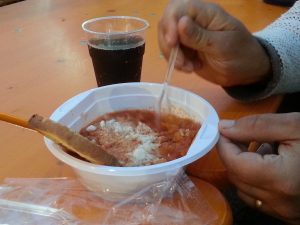 We did a perimeter check first to see what was on offer and Marcus decided to try a bowl of ‘trippa in umido’ (tripe in a tomato sauce with potatoes and beans) whilst I went to the next stall and collected a paper cone of ‘totani fritti’ (a type of fried squid rings) and one of ‘panissa fritta’ (chickpea flour made into a batter, left to set, then cut into chunks and then fried – basically chickpea chips). We found a couple of spaces amongst the large crowd seated at the tables and enjoyed the food and the atmosphere, even finding a couple of people to chat with who we knew, or who knew us anyway!

When we left to head back to the car we noticed a sign for ‘un accampamento’ or a campground, and sure enough there were rows of old fashioned tents with campfires dotted throughout. There was a battle re-enactment the next day and those involved had been mingling amongst us all during the night in their various battle dress, but they would be sleeping in these tents before their ‘big day’. Luckily the forecast was dry overnight, but on top of their modern day sleeping bags they had the more authentic animal skins to keep them warm and there were old fashioned candle lanterns to light the doorways. We got talking to a group of ‘Napoleon’s men’ around one of the fires and were offered a ‘digestivo’ before we left for the evening. My first taste was a soaked sugar lump taken from a jar of lemon and alcohol which was spoon fed to me on a gnarly old-fashioned rounded spoon – although judging by the amount of neat alcohol that hit my nose and then my throat I’d be correct in calling it a ladle! I was out of the conversation for a few minutes as I coughed and spluttered my way back to normality! They then offered me a battered old tankard into which they poured ‘Grappa di castagno’ or chestnut grappa. I don’t usually drink grappa as I find it too strong, but it slipped down like water after that sugar lump! 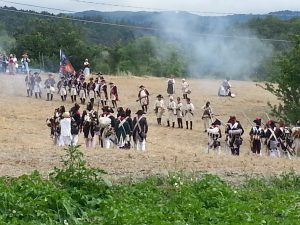 Battle day arrived and, with the field for the re-enactment being only a couple of valleys away and the sun shining, we decided to walk there. We arrived to the sound of gun shots and smoke filled air as the troops had started earlier than expected, or had we miscalculated the length of our walk perhaps? The next hour was really entertaining, if not a little confusing as to who was fighting who, but a quick Internet search when we got back home soon remedied that and all became clear. But the thing that I noticed most about the day’s events was that there were no safety rules … and more importantly no incidents. There were no barriers that you had to stand behind, no goggles, ear plugs or hi-vis vests handed out on arrival, no St John’s ambulance types, and just our one local policeman, who I think was actually there to watch the show. Everything went without a hitch and the applause for the troops at the end as they lined up in front of us was deafening, people clamouring for photos of themselves with the group and being allowed to, freely.

And after catching up on the details of the battle on the Internet, I wish to point out a historical mistake … as the troops celebrated their victory, they did not return to camp on foot or on horseback as I have read … they were in fact whisked back into town in the back of a flatbed lorry and a couple of small, yellow school buses!