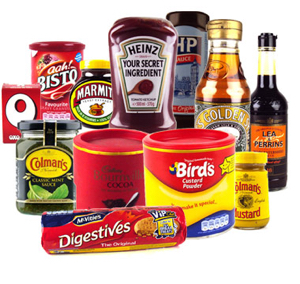 As settled as we are here in Italy, there are still a few things that I miss about England. Family, friends and our three rapidly maturing godchildren are the obvious things but Skype, Whatsapp and the odd email certainly make that a lot easier. Unfortunately it’s a little more difficult to Facetime with a bucket of Kentucky Fried Chicken or a good Chinese Takeaway (although much better for the diet that way!) However last week we took a road trip back to run a few errands, meet up with everyone and pick up some of those English ‘delicacies’ that we wanted, resulting in a very long shopping list compiled over recent months in readiness.

We set off on the Tuesday morning – two strong Italian espresso each under our belts as we were unsure of when we’d get our next ‘hit’ of decent caffeine. We were aiming for Saint Dizier in France for our first overnight stop and were pleasantly surprised at the great quality of the service station coffee on the way, obviously with the compulsory butter croissant. We also popped into a ‘Boulangerie’ at one point where we emerged with another croissant, a rustic baguette and a slice of warmed quiche lorraine to be devoured in the hotel for supper after our 12 hour drive. Marcus did really well to remember his French – I think as I’ve learned my Italian, my schoolgirl French has disappeared from my brain so I just pointed at what I wanted and smiled politely. Although when she asked if we wanted the quiche warming , we both automatically replied ‘Si’ instead of ‘Oui’!

Wednesday we had a 4 hour drive to the Eurotunnel where we sailed through (sorry but trained through didn’t sound right!) on an earlier train and arrived in Folkestone for a lunchtime stop in the sunshine. The first thing that struck me was the amount of traffic – and I’m not just comparing it to the tiny little road outside our house – the Italian and French motorways are empty in comparison and I started getting a bit anxious, breaking out into a hot sweat and cracking a window open to cool down! 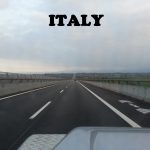 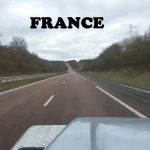 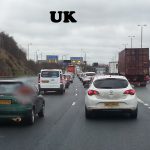 Our first stop was one of the big supermarkets as we had some immediate purchases to make. We’d both started with a thick horrible cold yesterday that needed attention today so we headed straight for the medicine aisle and practically swept every cold remedy into our waiting basket. I was unusually immune to the Easter aisles laden with £1 milk chocolate eggs and hot cross buns (apparently absence doesn’t always make the heart grow fonder) but I did succumb to a crème egg at the checkout – my first in over three years! Then onto Wakefield and our next hotel stop for 3 nights, literally dropping the bags in the room and going immediately out to a local Indian restaurant where we satisfied our first ‘miss’ – poppadoms, pickle tray, mixed starters and a really good curry each – yum! 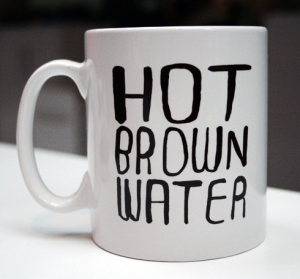 Thursday started with a breakfast in one of the supermarket restaurants (we were still on Italy’s clock so were up early – why is nowhere open at 7am in the UK?) and we ordered an espresso, an Americano and a sausage buttie. Italian sausages are delicious and normally 100% meat (in fact because they are such good quality they are often eaten raw on an ‘antipasti’ plate) but a sausage needs a bit of ‘rubbish’ in it to warrant being put into a soft white bap for a morning meal so I was looking forward to this! We tentatively ordered, telling the cashier that she was under pressure with the drinks as we were used to coffee in Italy, and she presented us with our tray, asking if I wanted milk with my Americano – not a good start! Marcus’s espresso had a good crema on the top so we were hopeful for his, but one sip each and the full cups were returned to the tray. I wouldn’t call myself a coffee snob but a large mug of weak brown water does me no favours at any time of the day, especially first thing on a morning! When we left, the cashier asked us how the coffees were – ‘Atrocious’ we replied ‘But the sausage buttie was delish’ – she seemed happy with that.

Supermarkets were the theme for the rest of the day, tackling our long shopping list and stocking up on those bits we can’t get easily, or cheaply, in Italy – lemongrass, curry powder, miso soup, marmite, paracetamol, lapsang souchong and rooibos teabags, along with some treats for our Italian friends – crème eggs, pork scratchings, Yorkshire beers, British dessert chocolates and boxes of fudge. We may have hit the clothes aisles a bit hard as well – there are as many plus sized people in Italy as there are in the UK but I have no idea where they shop, so I topped up my George wardrobe with a few items whilst we were there. 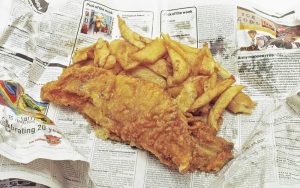 We had a re-energising fish and chip lunch (eaten out of the paper with loads of vinegar and a polystyrene tub of curry sauce to dip of course!) before continuing the shopping and meeting up with my parents for a Chinese takeaway and a couple of bottles of wine and our first decent cup of coffee of the day (I was in charge of adding the granules and so put in double the usual amount but it hit the spot).

Friday morning and we had more shops on our list so we started with a coffee at Costa – a mocha for Marcus and an Americano for me along with a slice of carrot cake to share which was really tasty. The coffees were very good but have we really been out of the loop that long that we were both shocked that a medium coffee is served in a soup bowl? – maybe it’s just that a three sip espresso in a cup the size of a thimble is the ‘norm’ for us now! We continued our mega shopping spree with a couple of the electrical stores and another supermarket (just in case we’d forgotten anything … we had … motor oil, copper grease and tissues) before spending the evening with our friends and godchildren and another Chinese takeaway.

Saturday morning we made time for a breakfast bap and an almost decent coffee at Asda’s restaurant before revisiting the electrical shop to buy a Nutribullet blender – we’d been given a demo by our godchildren the previous night and, after all the unhealthy food we’d consumed over the last few days, a few healthy fruit and veggie smoothies sounded like a great idea! We’d always said we would treat these few days away as a holiday but the minute we were over the border from France into Italy we were to be back on our Mediterranean diet, or as the Italians call it … food!

So with our final purchase squeezed into the only remaining space in the back of the car we headed for our last overnight in the UK, having booked a little hotel near Dartford. I had one more ‘miss’ on my list to satisfy so we dropped off the bags, headed for Bluewater for a long walk around the shops (I’m trying to justify my next sentence …) and bought a Kentucky Fried Chicken bucket. Back in the room we indulged in front of British Saturday night television and went to bed full … too full!

Sunday we headed for our late morning Eurotunnel train, arriving early enough to grab a Starbucks coffee each – another soup bowl serving (if soup bowls were made out of cardboard and about a foot high). I’ll give Starbucks compliments for the heat they managed to get into that cup though because it was 20 minutes before we boarded, 35 minutes trip under the sea and I was still drinking warm coffee when we arrived in Calais!

Our final night before we left France was spent in a small hotel near Dijon with a little restaurant. We thought ‘When in France …’ so decided to try it for the night and weren’t disappointed – a mixed buffet including ‘escargots’, a main meal of steak with ‘frites’ and ‘poivre vert’ sauce and a fantastic profiterole to share for dessert, finishing with a lovely, strong espresso each … finally! 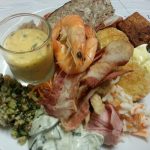 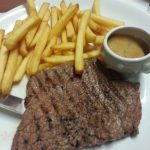 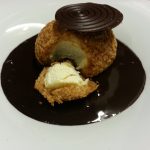 The last slog home on Monday was quite pleasant as we decided to leave the motorway for a while and drive through some of the pretty villages. We found a tiny little ‘Boulangerie’ and bought fresh butter croissants for a takeaway breakfast and a wonderfully fresh bread ‘flute’ and a chocolate éclair for a later lunch when we stopped somewhere. Marcus, in his now fluent French, asked if there was a bar nearby and we were directed 200metres down the road where we pulled into the carpark for our more usual coffee start to the day. As we entered we held the door open for an elderly couple who asked ‘Are you English?’ It turned out they had lived here for over ten years and they proceeded to tell us over our ‘grand café’ how hard it was living there, how their house has dropped in value despite all of the work they’ve done on it, how expensive materials are and the fact that they’d booked a few days away in the south of France but the forecast was for rain. Some people really aren’t morning people are they!

We continued on our journey, stopping at ‘Lac du Bourget’ to eat the last of our tasty French treats for lunch in beautiful sunshine overlooking the water, before finally driving into the Frejus Tunnel and emerging from the other side into Italy. 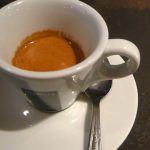 After satisfying all our possible English ‘misses’ during the week, we’d inadvertently started a list of our Italian ‘misses’. Luckily there was only one thing on it and we knew exactly where to find it. We pulled into the parking area of the first ‘Autogrill’ service station a couple of kilometres over the border, entered the bar area and ordered two espresso … after the wide variety of food we’d consumed over the last week, who knew there could be so much satisfaction in a thimble sized cup and three sips of strong coffee!