… and no fire without a chimney (at least if we want it inside the house and under control) so we had our next job on the list. The house when we bought it had no chimney, just a shiny patch of new roof tiles where the chimney used to be (a bit of detective work on our part as there was the old ‘stufa’ still in the kitchen with a flue pipe going into the wall and not reappearing again). We’d long since pulled the old, and very full of soot, flue from where it disappeared into the wall and had discovered the remnants of the chimney amongst some overgrown grape vines at the front of the house whilst tidying up a bit last year. According to one of our older neighbours the chimney had collapsed onto the ground long ago, and he should know, as he was the man who came around to retile the roof (with the shiny new roof tiles) where it once stood.

Marcus designed the flue with all of its pieces (inspection bends, double walls and ‘rossone’) and we ordered it back in November with most of the pieces arriving just a week or so later. It was another four weeks before all but two of the remaining pieces arrived. Then just after New Year the two missing pieces appeared … but were both wrong. Luckily we were very distracted with the work on the ‘fossa’ but when that was finished we realised that the two missing pieces only affected the kitchen and, as the flue goes all the way through the bedroom, the loft space and out through the roof resulting in a new stone chimney, we still had plenty of work to go at. With a dry weather forecast for the coming week we decided to get on with the chimney stack and work with what pieces we did have so far. 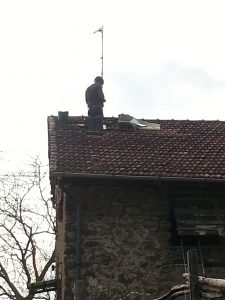 Unable to find our hard hats from our mountain of boxes from the UK, Marcus resorted to his climbing helmet and harness to climb up the roof. He’d set up the trestles in the upstairs ‘legnaia’ so was able to climb up the ladder and into that ‘room’ before lifting a few roof tiles and making his way onto the roof. The bedroom where the flue would come up through was over the other side of a 500mm thick dividing wall but, due to the asymmetrical design of our roof, it meant that he could do everything from ‘inside’ by leaning over the wall – no need to dust down our scaffolding for this job! He first cut two short metal beams into the house wall to take the weight of the chimney stack which he then built in preformed concrete blocks, adding the relevant flue lengths in the middle and filling the space between them with insulation. When he descended that evening we had a plain, boring chimney stack sticking out of the roof – but it was a start. 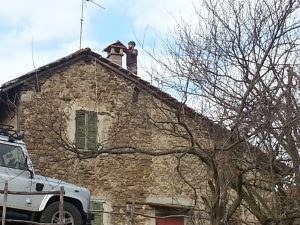 Day two started on the ground as we had to design the ‘cappello’ or hat of the chimney. This is more for aesthetic value rather than functionality but we wanted it to look part of the house and not a new addition so … a world away from what Marcus’s brain was telling him … he tried to build it slightly crooked, a little uneven and of course out of the right materials which meant hunting around our ‘fienile’ for the right tiles and stone to complete the job. Once satisfied on the ground he then took all the pieces up to the roof, opened the tiles up again and crawled out to create his masterpiece.

My job was to walk around our land at the back, and up and down the road shouting back to Marcus to say if it looked right, or too straight or too crooked. It was a tricky job getting everything balanced and mortared together with little room for manoeuvre but, as dusk fell, he put the finishing touches to the roof tiles on the top of the ‘cappello’ by painting them with a mix of yogurt and soil which I’d prepared earlier. Sounds strange but we’ve used this technique before – the bacteria in the yogurt accelerates the attraction of detritus and therefore the tiles age quicker, blending in with the rest of the roof. We even did a test at the end of last year on one of the exact same roof tiles we would be using but we never got chance to see the finished result as Malvina, next door’s dog, arrived one morning and licked it all off (it was still on the floor at this point, just in case you were wondering why she was up on the roof!) It was late when Marcus finished and by the time he’d pulled the last tile back in place to seal the roof again he was only able to stand back to admire what was now a silhouette of his new chimney. 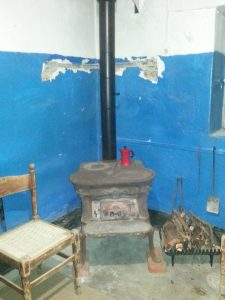 The following day we were forecasted snow so we’d already decided to leave the last bit of the chimney work for another day – cladding the concrete stack in stone slips (natural stone cut thin to eliminate as much weight as possible whilst still making the chimney look like solid stone). However we received a call from Manu at the builders’ merchants to say that our two missing pieces for the flue had arrived so we drove down to pick them up, cheered when we were sure they were the right pieces and returned home to tackle the inside job of building the flue.

By noon it was all in place and we’d hauled the old ‘stufa’ from its hiding place in the ‘legnaia’ and fixed that to the bottom of it. With a quick waft over with a brush (it’ll get a proper clean later) we were ready to ‘fire it up’ and test for the draw. This is to ensure that the breeze above the house is able to catch the top of the flue and draw the smoke upwards (it’s not a luck thing … this was all part of Marcus’s original calculation and involves the height of the ridge, the height of the chimney stack including its hat and the distance between the two – I think I was given the very basic explanation when I asked!) 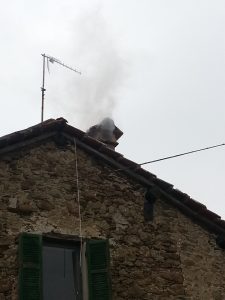 First off we lit a small fire and raced outside to see if we could see the smoke (the flue needs to be warm before we went onto stage two). Unfortunately a thick, snow filled sky is not the best backdrop to see smoke against and anything we did see I think was wishful thinking so we moved on. Stage two was the lighting of a smoke pellet – a little plastic capsule that bellows out smoke so you are in no doubt that the flue is working (or not working if your room fills with the acrid stuff!) so once again we raced outside. There was no doubt whatsoever – our flue had a perfect draw. It was like the Vatican when they announce the decision on the next pope … only with fewer spectators!

Over the moon with this result we headed to our covered wood pile, picked a mix of twigs, branches and logs and went back inside to try the ‘stufa’ for real. It didn’t take long to get going and we soon had all the joints checked and had worked out the best position for the air flow valve to ensure the flames were burning hot but not devouring the wood we’d put in. And then we left it to burn whilst we got on with the rest of our day …

… who am I kidding! We made pots of tea, sat around the fire chatting about the design for our kitchen and occasionally flicked the infra-red thermometer at the flue to ooh and aah at the rising temperature. As we were getting comfortable, the snow started … thick white flakes outside and a real fire inside … perfect. 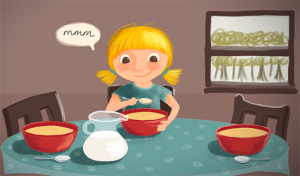 Marcus has been up on the roof again in some drier, and less snowy, weather to attach the lead flashing and the stone slips which now makes the chimney look like its always been there – a far better outcome than ‘Oh I see you’ve got a new chimney!’ We’re just playing around with mortar colours now so he can go up there one last time and point it up in between the stones – an easy job to do but finding the right mortar colour is proving quite tricky. ‘This one’s too pink … this one’s too white … this one’s too dark … we can’t wait to find the one that’s just right!

And Mr Rustico himself has updated his Blog with all things ‘watery’ this week so don’t forget to check that out as well on http://www.renovation.midlifeitaly.com