Apparently I am blessed with green thumbs here in Italy – good to know as we’re wanting to live a lifestyle where we grow a lot of our own fruit and vegetables. If I had the dreaded ‘pollici grigio’ (grey thumbs), we’d have to cover over the ‘orto’ and create a tennis court instead (although I’m not that good at tennis either!)

But not everything has cropped as well as it should have, and I don’t think I can blame the tardiness of my planting for everything, some things are obviously just not meant to be. For example we’ve been told that ‘carciofi’ (artichokes) don’t grow well in our zone, information gleaned from a friend when I told them that my two plants bought from the ‘agricola’ seemed smaller than when I planted them six weeks ago, whereas I seethed everytime we drove past a two foot high row of lush spiky leaves near the village only a couple of kilometres away. The ‘Cuor di Bue’ tomato plants that I bought from the DIY store kept budding ready to flower and then the heads would go brown and drop off – a shame as they are such a delicious tomato. 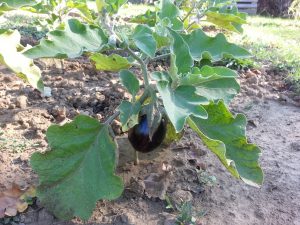 The ‘melanzane’ (aubergine) still have flowers on them and the other week I noticed five buds which have recently opened to reveal shiny purple fruit – unfortunately I don’t think the beginning of October with an 8-10degree drop in temperature is the ‘ottima’ time for an aubergine to crop so maybe I could use them as Christmas tree baubles instead! Undeterred we will resort to the shop-bought variety for our ‘parmigiana’ – a pan of which I am currently keeping an eye on as I type this Post, the smell of charring sticky aubergine not the usual accompaniment for most to a day in the office!

The ‘rabarbaro’ (rhubarb) which were very small plants when I put them in the ground this year have done alright but I think they need longer to establish themselves so I am hoping for greater things next year. It might be the variety (although with no distinguishing label attached to the pot I can only call them Italian) but the stems have been very thin and leggy, not what a girl from the Rhubarb Triangle in the North of England is used to! However the chopped up stems will sit in the freezer until the plant has exhausted itself this year and I can make a miniature crumble, or a thimbleful of jus to accompany some roast pork.

The ‘cipolle’ (onions) were a bit of a mixed bunch – both literally and figuratively. The red shallots all produced bulbs, bar one plant, although as I type this I can’t remember if they were supposed to be red onions and therefore a lot bigger – we’ll stick with shallots. I lost around half the yellow onions through the Summer and those that I did pick seemed only a little bigger that when I put them in – maybe they have the same ‘disease’ as my ‘carciofi’! 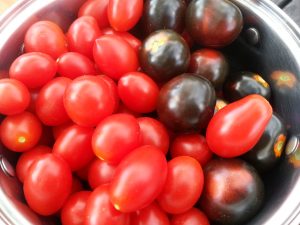 But there have been successes as well. The other tomatoes – black cherry, ovale luana and Marmande have all produced good crops and I’m still finding the odd red one now before I need to throw in the towel and find a recipe for a green tomato chutney. The ‘barbabietola’ (beetroot) was a surprise as I’ve never grown it before but we now have some prepared bulbs in the freezer ready for roasting with garlic and carrots when the weather cools a little more. The potatoes were some that we’re left in the bottom of a bag bought from the supermarket and were thrown into the ground too late and without chitting, but I still raked in a considerable harvest of small potatoes.

But I have truly excelled in two vegetables – beans and peppers. Ironic that when I was little I hated green beans, but every other day I’m picking a handful from my own plants to throw into a pasta with a spoonful of pesto stirred through. The borlotti beans I bought because I loved the colour of the seeds but they’ve done well – the hardest thing with those was deciding whether to pick them fresh and freeze them ready for just a ten minute cooking time when I needed them, or leave them to dry on the plant, store them in a jar and soak them over night when the time came to use them. No surprise, they’re in the freezer! 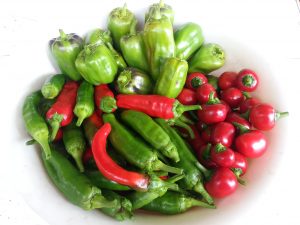 ‘Peperoni’ have been a great success – not only did I get at least one green bell pepper on every one of my twenty one plants that I’ve raised from seed, but as you know, the ‘pepperoncini tondi’, bird’s eye chillies and jalapenos have all been prolific, all still with fruits to pick, and probably make up a good third of my filled jars in the ‘cantina’. There’s another type of ‘peperoni’ which I’ve grown, a crop of which we’ve already eaten simply fried in oil and with a little bit of water. These ones are called ‘friggitelli’ and are a pointier version of the bell pepper with a sweeter taste, hence its perfectly descriptive name of Sweet Italian pepper. We ate our first batch whilst they were green as they are sold in the shops like that, but with the hot Summer I’ve left this second glut to go red so we can taste the difference – I’ve preserved some in oil and some ‘sotto aceto’ (in vinegar) and added a couple of boxes to the freezer as well – they’ll certainly brighten up a dish of pasta in the Winter months. 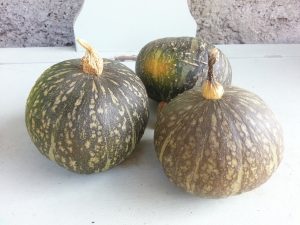 The ‘zucchini’ are almost finished now, the flowers disguising the limp yellow attempts of further courgette growth, but I do have 3 small ‘zucche’ (pumpkins) – all three with their fate already sealed – pumpkin ravioli, pumpkin pie, and a little Halloween lantern (probably with the hollowed out centre going to boost quantities of the aforementioned dishes). Although looking at them again this morning, portions are going to be very much on the small side so I could just add then to my new compost-friendly Christmas tree bauble collection instead!

But next year we have a plan – our neighbour keeps horses, 12 of them to be exact, and she has offered us ‘letame’ (no translation needed here … just read on) whenever we want– we just need to trundle up the road with our wheelbarrow and collect it. All the nutrients we need for pumpkins the size of basketballs, tomatoes that stay on the vine long enough to fruit, onions that don’t think they’re of the spring variety and rhubarb stems you could use as an umbrella. I might even chuck a couple of ‘carciofi’ in to see what happens, but I won’t tell the neighbours until I’ve got the fruits to prove it!