With Hallowe’en having come and gone, you’d think we’d seen the last of the pumpkins but here the scary celebration heralds the importance of a season of zucche in all shapes and sizes. We thought we’d buy one of these knobbly beauties and create a couple of dishes from it … well that was the idea anyway.

Once bought it sat in the cantina for a while as we discussed what to use it for … risotto … soup … ravioli with a ricotta cheese and pumpkin stuffing? We couldn’t decide which to try first so, after another successful pizza evening and the heat in the outside wood oven dropping, I quickly sliced up the pumpkin into wedges, drizzled them with olive oil and roasted them in the remaining heat. The next morning the flesh was carved from its skin, chopped into chunks and popped into the freezer … where it has stayed since! 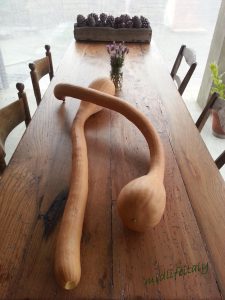 Now this was not us procrastinating, this was us receiving a surprise regalo (present) very soon after the freezer lid was closed. Clara and Rosalba, the daughters of our elderly neighbour were found marching up our driveway the following day, each armed with what looked like a huge baseball bat … we wondered what we’d done wrong! However these baseball bats turned out to be edible … zucche trombette d’Albenga (a pumpkin variety named after the town in Liguria, and grown in the region). Each of them was over a metre long, and when I got chance to weigh them I was faced with four kilos of pumpkin to prepare … and not enough room in the freezer! 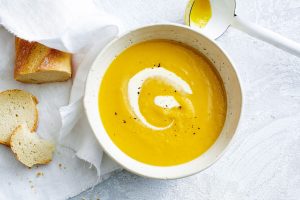 So the thinking caps went on again and we decided soup would be a good recipe to try first … once Autumn hits you can’t beat a lovely warm bowl of something on a lunchtime when working outside, especially when we’ve had chance to bake some of our crusty bread as well. I found a recipe that called for the pumpkin flesh to be boiled, and when added to vegetable stock, onion, freshly grated ginger and a sprinkle of dried peperoncini it produced a real Winter warmer … delicious!

However, this recipe only tackled a kilo of these two monsters so I hit the internet once again to find a recipe for that American festive dessert … pumpkin pie. I’ve had this once, my mum made it when I was about 13 years old and I remember being pleasantly surprised with the taste (it’s a vegetable with sugar!), but somehow I never thought about trying it again over the following years. Today was the day that the thought of a spiced pumpkin custard sitting in a sweet pastry seemed appropriate so my recipe search began. However, it was not to be … any recipe mentioning heavy cream or evaporated milk was quickly dismissed as these ingredients are not easily available here in Italy, and more specifically don’t already exist in my cantina. 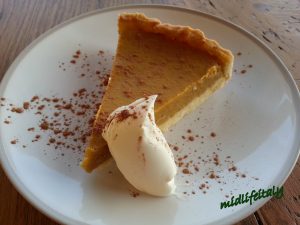 The following day, with a lull in my workload in the afternoon, I tried searching again and there, in a hidden nook of the internet, I found a recipe that would work with simple ingredients that I had in abundance … milk (check), sugar, butter, spices, eggs and pumpkin (double check!) I already had a favourite sweet shortcrust pastry recipe that I used and so that afternoon I was able to make another small dint in our pumpkin mountain, resulting in a Christmassy smelling caravan as the orange tart cooked away for an hour. Resisting the urge to eat a slice that night (it is best served cold) we had a sneak preview of the filling as my tart case seemed a little on the small side for all of the pumpkin ‘custard’ so I poured the remainder into a couple of ramekins and cooked them in a ‘bagnomaria’ in the oven alongside the pie, giving us a cheeky early taster.

And the verdict … well if I tell you that we’ve now allocated a patch of our orto next year for pumpkins, I think you’ll get the idea. I’m sure we’ll get around to making the risotto and ravioli at some point although at the moment, the idea of choosing those savoury recipes over this sweet dish seems a little ‘Pie in the sky’!