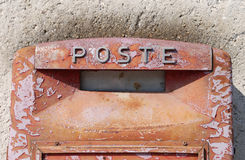 I’d read about the postal service in Italy before we arrived here – it is not painted as the most reliable of services but it somehow works, like most things in Italy. However there’s a twist that they don’t tell you about, no matter how much you search on the Internet – we’ve since found out that it’s not so much of a service, more of a ‘fai da te’ or a ‘do it yourself’ system.

Take our postman for example – a very pleasant man who waves whenever he passes us in his little van in the village and talks to us at a hundred miles an hour, despite us asking him to speak a little more slowly. Although he speaks in dialect a lot of the time and that’s usually delivered at two hundred miles an hour so I suppose he is doing what we’ve asked! We have a perfectly nice post box at the bottom of our driveway – not the biggest of post boxes (I wanted one of those American sized ones with the plastic flags on the side that the postman flips up when he’s put post inside – Marcus thought that wasn’t very Italian though so we bought our little ‘cassetta’ and stuck our house number on it) but if there’s a letter or a bill they fit inside perfectly with no fuss at all. However, our ‘postino’ has taken to announcing his arrival at the previous corner to our house with a loud ‘toot’ of his horn so that when he arrives at the bottom of the driveway either Marcus or I usually are on our way down the slope to greet him and save him the hassle of physically putting the letter in the box. In fact the post box is so rarely used that the other day I opened it to find three or four yellow jackets inside building a nest – well at least someone is getting some use out of it!

But it’s not only ‘il postino’ who needs our assistance in delivering something. The other day I’d ordered a package from Amazon, input my new address details and telephone number and sat back to wait for the expected delivery date. I know we’d been spoilt at the campsite where the delivery driver knew exactly where we were and, after two years, would unzip our caravan awning and leave the package inside if we weren’t around – the same went for the postman there actually. But the morning of the delivery I received a call from our new delivery driver who explained, in very fast Italian, that he knew the area but not the countryside part where we were, but he was a friend of the lady who works at the ‘farmacia’ or chemist, in the nearest village so could he leave the package with her. He would have it delivered by the time they close for lunch so that I could collect it when they re-opened at three o’clock. It was a package I wanted so I agreed this time and at three o’clock I called him to see if he had indeed delivered the package – we did not want a wasted trip into the village. He confirmed that he had and said he’d been talking to the lady in the chemist and now knew where we were – ‘I know your neighbour at the Agriturismo with the horses … I deliver there all the time’. ‘Well we’re the next house along the road about 200 metres away’ I replied. ‘Ah well next time I can deliver to your house’ he said. What a revelation, a delivery driver who delivers to your house … what will they think of next?