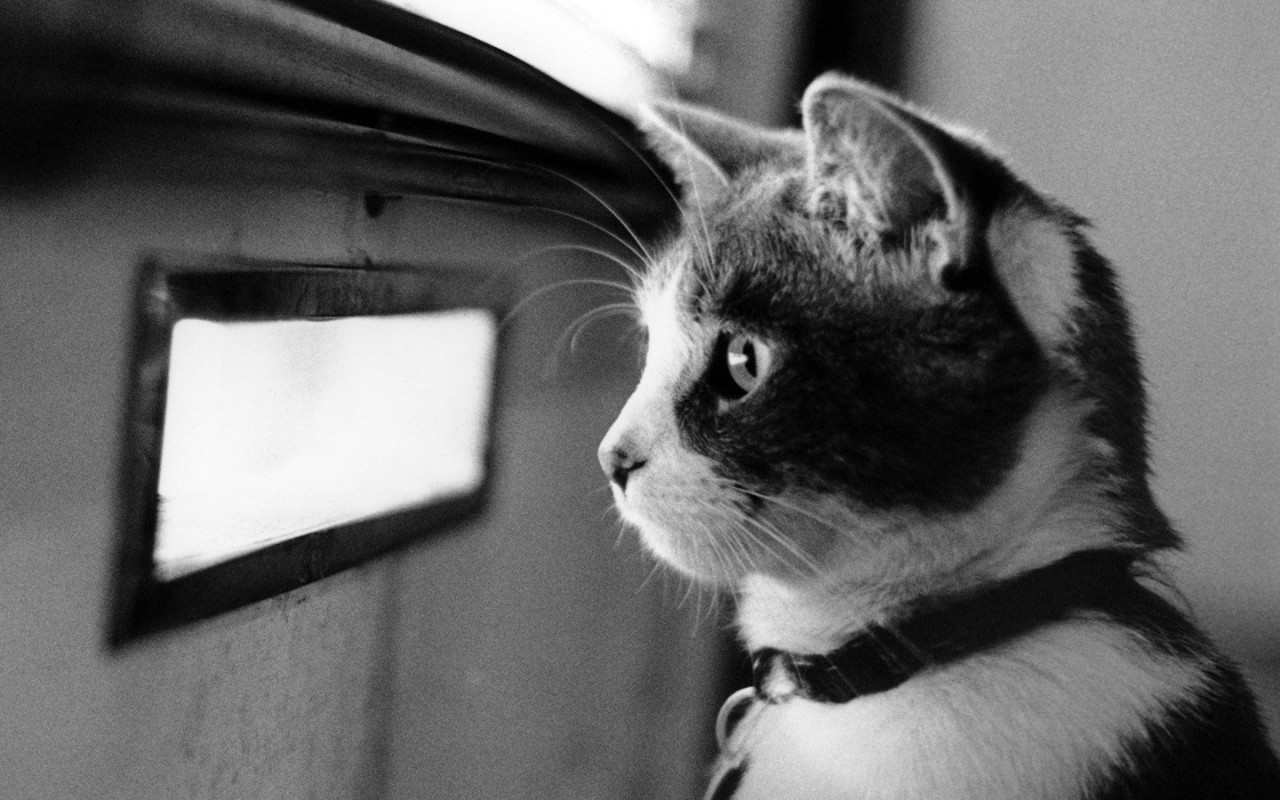 Translated as ‘We’re waiting …’ I’m referring to the numerous fruit trees that are dotted around our garden. Everything has got signs of the growing fruit on them so we’re preparing for a glut – even if my vegetables don’t come through (due to us planting everything two months too late) I’m sure we’re going to be over-run with fruit. We decided on a three pronged plan of attack – firstly we went out and bought a chest freezer to put in the ‘cantina’ (and the first thing we put in was a bottle of limoncello liqueur – which is technically fruit based), secondly we are currently scouring the Internet and asking nearly every person we meet about the best way to preserve the fruits – be it freezing, making jam or more liqueur! And thirdly we just have to sit and wait and hope that the occasional winds that make it into the valley don’t rob the trees of all our fruit before we get chance to taste any of it!

‘Ciliegio’ – We’ve already had at least two batches of freshly picked cherries from the tree behind the house – they are a beautiful orangey red colour with a thin skin and are the lovely tart ones that dry your mouth after you’ve popped just a few onto your tongue – the same feeling you get after drinking a glass of cranberry juice. But last year we were given a pot of homemade jam from a friend who’d used these same cherries so we are certain of how we’ll be preserving these fruits. However much we like eating them straight from the tree – there comes a point when the stomach ache tells you you’ve had enough! 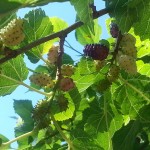 ‘Gelso’ – I’ve never eaten a mulberry before but we have three of these large trees and they are full of fruit – I was enjoying picking the first ripening ones this week until I read an article by someone on the Internet who described them as little red haemorrhoids hanging from the branches! However I quickly got over that and went back to hunting out the darker berries between the foliage – the red ones taste a little like watermelon and are really refreshing, but the ripe black ones are intensely sweet. I’ve read that they work really well as a dried fruit so one evening we can use all that leftover heat after cooking a pizza to dry and preserve these little beauties in our wood oven, and Marcus won’t need to hit the aisles of Asda next year for a bumper shop of Christmas Pudding ingredients! 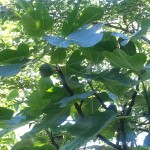 ‘Fico’ – The figs are taunting me … I love figs after tasting my first one straight from the tree on a sun soaked day when we were on holiday in Spain (I use the term ‘holiday’ but it was actually our ‘Do we want to live in Spain’ trip). The plastic supermarket packaging in England and here in Italy does not do them justice and I was thrilled when we found a couple of fig trees at our last campsite. At the house we have three large trees and for the last few weeks the fruits have been at full size but are still pretty solid. However that hasn’t stopped me checking them regularly for signs of ripeness – so now I’m not sure whether they are ripening or whether they are just softening due to being poked and prodded every day! 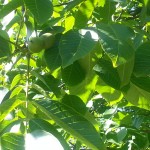 ‘Noce’ – the walnuts are another completely new thing for me. At the moment they are hanging in pairs on the tree, looking like tiny, oval, speckled green apples. However I am in no rush for these as walnuts in their shells have always been a Christmas food for me, and we’ll need something to eat once the Summer fruits are gone. Despite the saying here that ‘to sleep in the shade of a walnut tree gives you a sore throat’ we have managed to survive our sunny days so far without the ‘mal di gola’. Although we have heard that this was a saying made up by farm bosses who’s workers would have their lunch under the shade of the walnut trees when working the land – the threat of suffering from a sore throat was just a way to get them back to work, rather than having them enjoy an extended ‘siesta’ in the shade. 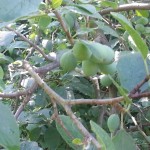 Prugno – These plum trees are the most numerous around our land, at least half a dozen next to the ‘orto’, three at the back of the house, and another three running alongside our driveway. They are the smaller ‘susine’ plums that we used to scour the markets for in Summer last year and are deliciously sweet. Again we were used to eating them straight out of the box but given that twelve trees will produce too many for us to eat in one sitting (and remember we will already have stomach aches from overdosing on the cherries) then I think jams and pies will be making another appearance. 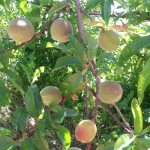 Pesco – With one peach tree in the garden and several more along our land on the other side of the road, I think this is the fruit for which we are going to need the most recipes. We have a mix of yellow and white peaches and they are much smaller than the ones that appear in the shops, more like the size of an apricot (and no … they’re not apricots!) We’ve had many comments throughout the Spring from passing neighbours and tractor drivers that they are delicious so I think we’re going to have to arrange some sort of policing system to make sure that we do indeed have enough left for any recipes we want to make. 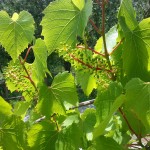 Uva – We keep finding grape vines – well you can’t miss them when they’ve remained unchecked for years and the first sight of them is when they’ve scaled a five metre high plum tree and burst into foliage overnight. However these vines will be unravelled and trimmed over the next few years, but we are lucky to have already rescued ten vines that are now happily supported on some form of timber structure, whether a fence or a pergola. But there’ll be no wine making this year – for a start we don’t know how many grapes will be produced yet but the main reason is that these are the ‘fragole’ grapes – the strawberry tasting ones that we love, so I think we’ll be struggling to get them into the house without eating them straight from the vine, never mind having the patience to set them aside in the ‘cantina’ in a demijohn! 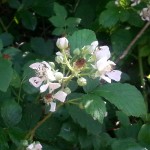 Mora del rovo – Blackberries grow in the hedgerows here, just as they do in England. And we are fortunate to have some hidden amongst the plum trees next to our ‘orto’, as well as alongside the road in front of the house. With only three or four cars passing every day, I don’t think we need to trouble ourselves with them being contaminated by car fumes, but there is a bit of a steep drop off onto the next ‘fascia’ below – we’ll just have to tie ourselves to the nearest plum tree using a spare grape vine!

We’ve also got apples and an antique variety pear tree – well that’s the news on the grapevine from our neighbour (sorry … couldn’t resist) – so crumbles and pies will be a regular feature as we head towards Autumn. And we’ll also have the rhubarb that we’ve planted in the ‘orto’. Luckily there’s an International food shop at Savona that sells Birds Custard powder so we may have to stock up on a couple of tins and treat our Italian friends to some proper English hot puddings.

Note: All the photos in this Post are of our actual trees and fruits and were taken over the last few days.