With the wood oven being fired up for a roast chicken, and the bread cupboard looking decidedly bare (not that our caravan came with a dedicated bread cupboard – we’ve just repurposed the microwave which we never use), Marcus was preparing to make another loaf of bread. I piped up that I’d not yet made a bread in our outside oven – to be honest I’ve probably only ever made a couple of loaves in my whole life as Marcus is the ‘Bread King’ in our household (he enjoys making them and I haven’t the patience!) Whenever he makes a pizza these days, he always makes enough dough to form into some sort of cob that we have for breakfast the next couple of days but the nature of pizza is that the bread is then made out of ‘Tipo 00’ flour. I wanted to try ‘Tipo 0’ flour and added that I’d found a recipe where the fresh yeast was put straight into the bowl with the flour rather than leaving it in water first to froth which he does. ‘Are you questioning my tried and tested methods?’ he asked, ‘Maybe’ I replied … and so the Bread Off was born.

During the morning, plans were formed and we indulged in a little ‘trash talk’. Whilst working on his website Marcus would occasionally drift off in thought – apparently deciding whether to use a tin or go free-form, whether to leave his proving bread uncovered and whether to slash the top or not. I prepared my ingredients so the butter could soften – ‘Butter … I never use butter’ was a comment from the sidelines – and I warned Marcus against moving my bowl in case he ‘accidentally’ made the salt and the yeast touch (a big ‘no no’ in bread making). And with Marcus being in charge of the fire building I requested that he got a nice even temperature throughout and didn’t banish my loaf to a hot spot. What a trusting and healthy marriage we have eh!

After lunch we armed ourselves with our chosen recipes (I was following Paul Hollywood’s recipe and Marcus stuck with his trusted Jamie Oliver recipe scribbled onto a piece of paper many years ago and now smattered with the tell-tale signs of a favourite bake – oil spots and crusty bits of dough) and a variety of Pyrex bowls and jugs, we set up our kitchen on the table outside. This was a brilliant idea of mine the first time Marcus made bread here as our caravan is far too small for the whole masculine urge to use every of pot and pan in every cupboard plus space for kneading and great fistfuls of flour being flung all over the place. So he was banished to work on the table outside – and it works perfectly – unless it is very windy and then most of the flour ends up on the garden and we have a winter wonderland in the middle of May! 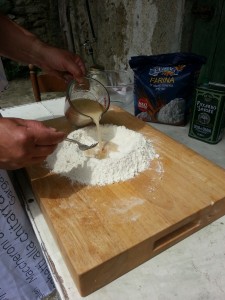 We created our masterpieces in the afternoon – me mixing first and leaving mine to prove for two hours whilst Marcus made his dough and then left it next to mine. They both rose pretty much the same so when we formed them into the ball shape required for the oven there was nothing much between them. Fifteen minutes later, Marcus’s looked to be creeping ahead on the second prove, I panicked and reformed mine into a tighter ball and then watched, miserably, for an hour as Marcus’s bloomed into a beautifully round loaf and mine struggled to get to half the size! 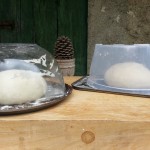 When time was up on the proving, and Marcus had the fire going in the outside oven he spent five minutes deciding how to slash the top (I’d even freshly sharpened the knife for him) but he didn’t realise how sharp it was until he eventually hit the top of his dough with the second of his two cuts … I thought he’d decided to make two loaves as he almost cut it in half! He then panicked at how deep he’d cut it, so quickly put it in the oven, closed the door and then paced up and down the garden for the next half hour whilst waiting for it to cook. Technically mine should have gone in first as it had been made first but I wanted it to prove a little longer, hoping it would get a little bigger after my reform … all the while Marcus is joyfully telling me about the perils of over-proving and tight crumb texture! 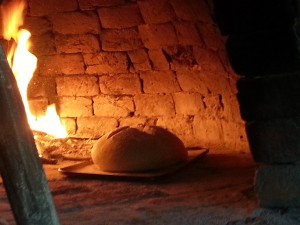 We think we must have lost the temperature of the fire during the evening somewhere as, when Marcus’s bread looked ready on top, it was still a little soft on the bottom (it should sound hollow when knocked) so he, somewhat unconventionally, put his back in on a mesh grill to get some heat to the bottom whilst I carefully slashed the top of mine and placed it inside to cook. By half past nine at night his was ready and it was starting to rain. Mine was a little soft still so we brought his inside for supper and left mine overnight in the oven with the promise of warm bread for breakfast. 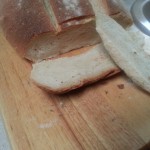 They both looked good (and by good I mean like loaves of bread) and were quite similar to each other. The taste was ever so slightly different – an extra teaspoon of salt in mine could be the reason for that but there was no outstanding difference. Even the size was similar as Marcus’s had shrunk a little in the oven due to the deep wound he’d inflicted on it when he slashed it with the knife (ha ha!). However Marcus’s crust was nicer as it was thin but had some give in it. Mine had a really thick crust that was tricky to cut through without covering the inside of our caravan in shards of bread (should have used the outside table!) 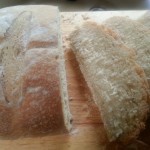 and on my first bite I managed to cut the corner of my mouth. And the verdict : I am no threat whatsoever to Marcus’s position as Bread King and shall only step in when bread is needed (no pun intended – just a happy accident) and he isn’t able to make it. I like his bread, more importantly he likes to make it which means I don’t have to, and when we have slices of his bread for breakfast we can have it with jam, marmalade or Nutella … no Savlon required!