I’m dreaming of a hog roast – a huge piece of juicy, tender pork with a crunchy crackling and that lovely ‘Sunday Roast’ smell whilst it’s cooking. I’m not particularly hungry nor do I have a hankering for a full roast dinner, I’ve just had a territorial ‘run in’ with a couple of cinghiale and I want revenge!

It all started at the beginning of this week. We had some friends over for pizzas on Monday evening (Bravo Marcus – there’s no better compliment than Italians enjoying your home-made pizzas!) and, whilst we were discussing the orto, Simone suggested that I might want to get my potatoes dug up as they could be eaten by mice if I leave them in the ground too long. 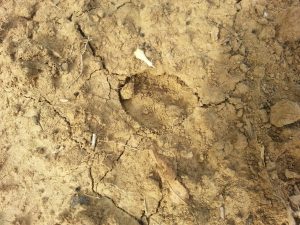 With a couple of full days on the horizon I didn’t get around to getting back into the orto, other than a quick evening watering session, until Thursday afternoon and when I strode over to the potato trenches I thought something looked wrong. The whole area looked flatter than I remembered … and then I noticed a few potatoes on the top of the soil … then the various holes that had been dug across the whole area … and then the footprints. Now if these were mice that had done this damage they’d chosen some pretty natty footwear for their escapades that very much resembled cinghiale hooves! 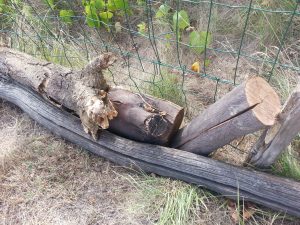 My initial reaction was to go and search for a smaller crate to ‘fill’ with my more meagre harvest, and on the way back to the shed I did a perimeter check of the fence – sure enough there was a point backing on to the woods where the wire mesh had been nudged upwards, presumably to allow a couple of small, determined bodies to pass through. In fact, I also noticed a trail of half-chomped potatoes from the hole to the potato beds so assumed this was not only their entry point but also their exit point too. So before I could salvage any potatoes I had to first repair the fencing and do my best to make it ‘pig-proof”. Fifteen minutes later, with some nifty wire bending and a few heavy tree trunks rolled into position, I turned my attention to the flattened beds to see the full extent of the damage to our crop. 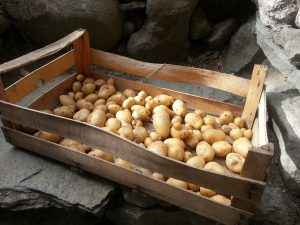 One thing I will say is that the piggies did a really good job of loosening the earth around the plants, and the potatoes that were left were at least easy to spot and collect!

However it’s a good job we weren’t counting on them to get us through the Winter months as, by the time I’d collected every single one … and in desperation I was collecting even the marble-sized ones just to keep the numbers up … we probably had just enough to get us through until our next weekly shop! 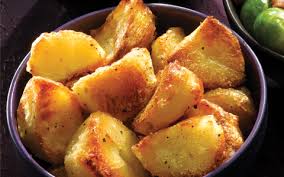 But if my hog roast fantasy was to become a reality, there is just one thing missing … and that is that there’s nothing better with that huge piece of juicy, tender pork with a crunchy crackling than a large side of crispy roast potatoes!