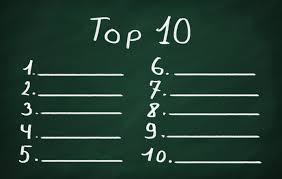 We’re still learning new words and phrases every day, whether watching Italian television, listening to Italian radio, chatting with our friends or when we’re visiting the builders’ merchants (this one we seem to be doing a lot of recently!) But some words stick in my mind, either because of what they mean or how they sound (especially when said correctly by an Italian who can roll their Rrrrrrs – I still can’t do it!) So here are some of my favourites, in no particular order …

Chiacchierare – meaning ‘to chit-chat’. I love the sound of this word, and the meaning is very important to me. I’ve said before that I never expected to be able to just pass the time talking to people here in Italy, as I always thought the language would be too difficult to use in this fashion. Turns out that chit-chatting comes as naturally to me in Italian as it does in English, making me a great chiacchierone!

Decespugliatore – not that we use one regularly now that Marcus is happier swinging a falce when it comes to cutting the grass but this is the word for a ‘strimmer’. The word cespuglio means ‘bush’ so I remember this as a de-bushing machine!

Chiodo di garofano – A garofano is a ‘carnation’ and a chiodo is a ‘nail’, so you’d be forgiven for thinking that this is a nail of a carnation (which would look like what exactly?) After a long conversation with some friends to try and explain this word we finally hit the ‘nail’, or chiodo, on the head when we said ‘clove’. They were telling us how they made mulled wine and it took us a long while to guess this spice.

Mozzafiato – meaning ‘breathtaking’, for example when seeing one of the many fantastic views here in Italy. It literally means to chop off one’s breath – mozzare ‘to cut off’, and il fiato ‘breath’.

Coccolare – to me this word sounds like what is describes, in this case ‘to cuddle’. ‘To have a cuddle’ is fare una coccola, and a term of endearment, similar to the word ‘darling’ is cocco. However it also means ‘coconut’ so make sure the person you say it to knows your intentions! 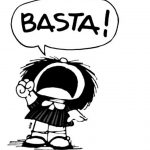 Abbastanza – this means ‘enough, fairly or quite’. For example un vino abbastanza dolce is ‘quite a sweet wine’. It’s a lovely, soft sounding word compared to its shorter cousin basta which, at the cheese counter in the supermarket when you’ve asked for 200g of something and they weigh out 198g means ‘That’s fine, no more’. However with a little more exclamation Basta! becomes ‘Enough! That’ll do!’ Which is what us Yorkshire folk say when we ask for 200g and they give us 202g!

Dondolare – means ‘to rock or swing’ and dondolarsi literally means ‘to swing yourself’ (the si at the end of the word making it something you do to yourself) so means ‘to sway’. Un cavallo a dondolo is therefore a ‘rocking horse’. 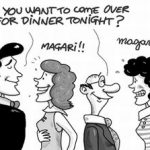 Magari – A lovely exclamation meaning ‘If only it was true’ or, more pessimistically ‘Yeah, right’. The pronunciation is long and soft … Magggaaari!

Menefreghismo – is a ‘couldn’t care less attitude’. The phrase Non mi frega niente is usually accompanied by a flick of the hand under, and then away from, the chin, or sometimes you’ll see just the gesture itself. If you’re on the receiving end of this, you may want to turn your attention to something, or someone, else.

Abbiocco – ‘the drowsiness that follows after eating a big meal’. The word itself is lovely but it also appeals to me that there is a single word the Italians use to say ‘I’m stuffed to bursting and I want to go and sleep it off!’ It had to exist here in Italy with all of its delicious food!

And the longest word in the Italian language? Precipitevolissimevolmente – meaning ‘in a way like someone that acts very hastily’. It is built from the word precipitevole which means ‘hasty’, then precipitevolissimo which means ‘very hasty’. It is not grammatically correct but is part of the language and is sometimes used in jokes. It’s a tricky one to remember so I think I’ll leave the joke telling for now and stick to being a chatterbox!