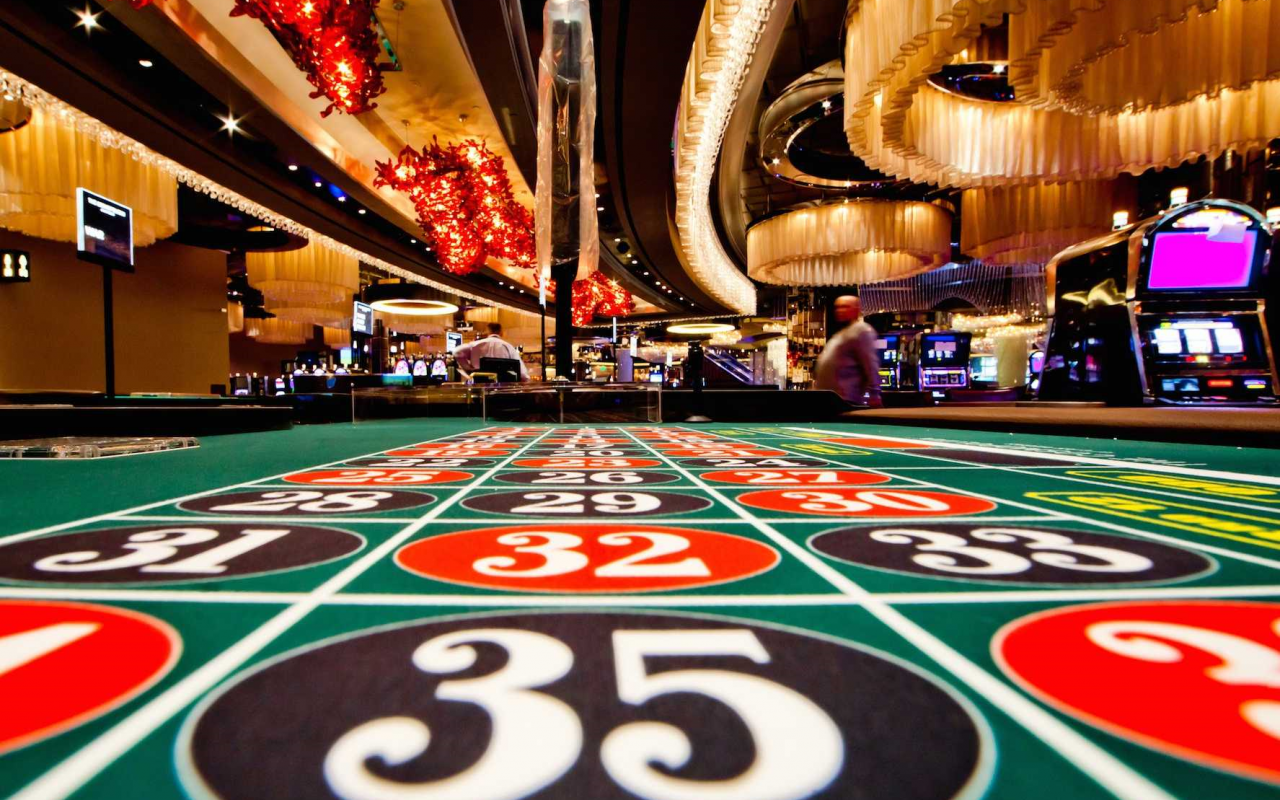 I’ve misled you with the picture I know, as I’m not talking about blackjack and roulette, free drinks whilst you play and whoops and yells of delight as you pocket mountains of cash.

‘Un casino’ in Italian describes something that is a mess from ‘il suo trucco è un casino’ (her make up is awful) to ‘il mio giardino è un casino’ (my garden has been destroyed by all the trenches we’ve had to dig for our underground drainage and looks like a bomb has hit it and I don’t know when it’ll ever look flat again and I just want to cry) … you get the meaning! 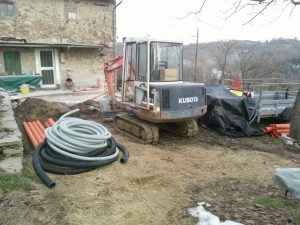 Maybe I’ve used my artistic licence a little here, but it has been a pretty messy few weeks ‘a casa nostra’ and I’m glad that the end is in sight. Once we’d got the ‘fossa’ in place and covered in a concrete raft before Christmas, everything was looking quite tidy, apart from the array of differing vehicles we had parked on our lawn area (I say lawn – it hasn’t been a lawn since early last Summer and even then the majority of the green bits were weeds). We’d moved the excavator up out of the field ready for the trench digging and it was parked up alongside the trailer and the motorised wheelbarrow for a few days, looking like the starting line for our previously mentioned whacky races. 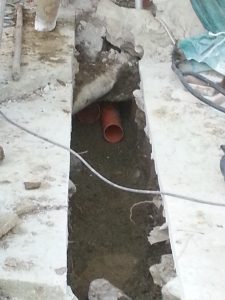 All this was so we could join the house to the newly created ‘fossa’ with a long run of underground pipe interspersed with the odd ‘pozzetto’ or inspection pit wherever there was a change of direction to allow for any future ‘rodding’ requirements (hopefully never!) Marcus’s first job was to dig out a trench in the floor of the ‘cantina’ which confirmed that our house is built on rock and piles of river stone (the rock of course being exactly in line with the trench Marcus was digging). The next part was even trickier – now, two feet down, he had to dig under the wall of the house to outside so he could continue the trench. Our house wall is about two feet thick, and the trench was diagonal, with a concrete drainage pipe to avoid … it was over a day’s work with the breaker, various drill bits, spades, metal bars and a lot of colourful Italian language, but eventually we had that ‘Channel Tunnel moment’ where both sides met underground and there just followed the long and tedious task of making the hole big enough for the two trains pipes – yes there was rock here too of course.

After that he was in the open again and made short work of cutting the trench across the old concrete terrace, digging out more river stones as he went – all of which are in a pile in the garden now, awaiting a moment of inspiration when they will be formed into some feature or another. 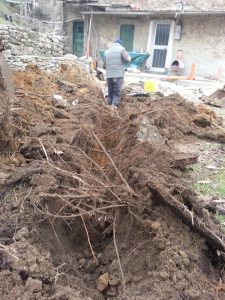 And then came the smile as he reached for the keys for the excavator and proceeded to rip up the rest of the garden in a straight(ish) line all the way to the banking which drops down to the ‘fossa’. Our only obstacles here were a couple of important looking roots for our ‘noce’ (walnut tree) which we managed to hopefully just graze (although we are praying for nothing more than a light breeze over the coming months so it can regain a hold in the ground), and the fact that we were running out of space to put the soil that was coming out of the trench. However, we got the job done … and with the excavator penned in with soil, we just had to leave everything as it was overnight … and boy did it look chaotic! Even the light covering of snow that fell during that evening didn’t make it look any prettier – it only highlighted the fact that our garden was ‘a little uneven’! 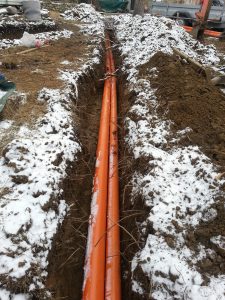 The next day, as a small thaw set in, we literally slipped around the garden on the quickly forming mud, laying drainage pipes, making sure there was a gradual fall across the whole length and trying to hold the spirit level in place without kneeling down, to avoid the ever-stickying mess covering our trousers and hands (didn’t work … the washing machine was in for a treat!) With everything in place, all the joints glued and Marcus with bright orange hands for two days from smearing the red glue with his fingers (yes I told him to wear a latex glove … and no he didn’t listen) we were ready to put the garden back together. A few quick mixes of concrete, a trundle around with the digger, pushing and squashing the soil back into the trench, and a raking over the top and we were as good as new – albeit with a few new intentional level changes (well all that spare soil had to go somewhere).

A great advantage we’ve found when doing the job ourselves is we can add some ‘while we’re at it jobs’ and we’ve done this ever since we can remember (our first row of blocks that we laid when building our new house in the UK were immediately changed to reposition the doorway for the lounge) and this trench digging and pipe laying offered us many opportunities to personalise things further. Before covering the trench, we threw in a water pipe and some electric cable in conduit, meaning we could connect up the caravan with a more reliable Winter water supply, but also use this in the future for a large agricultural building we’re thinking of constructing in a few years’ time. With another day of persistent wall drilling from Marcus we were able to reroute our mains water board into the ‘cantina’ to avoid freezing in these minus temperatures we’re experiencing after the meter itself exploded after becoming frozen, the new garden levels allow for a project that will make use of any water run-off in Winter and the clay drainage pipe that was the bane of Marcus’s life for a day is now repurposed to take away excess water from the stone wall behind the house … Seven birds, one stone! 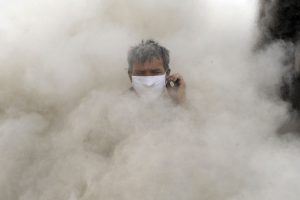 At the weekend, after further concreting in the ‘cantina’ to not only fill the open trench but to create a level plinth on which to sit my washing machine and tumble dryer (and a quick half hour from Marcus to reroute the relevant electrics, drainage and a water supply) I got to do some cleaning. Despite the dust sheets that have covered everything for the past two weeks, we were having to wipe down tins of coffee and boxes of teabags from our spares cupboard every time we ran out in the caravan so my task was to get everything ‘usable’ again. But I now have the smartest little ‘cantina’ with not a speck of dust in sight. That is until we knock through the new doorway to the kitchen or remove the ‘cotto’ tiles and the cement screed from the bathroom upstairs with only old warped, gaping floorboards above our heads to contain the detritus

… but isn’t that what they say about a casino … the house always wins!