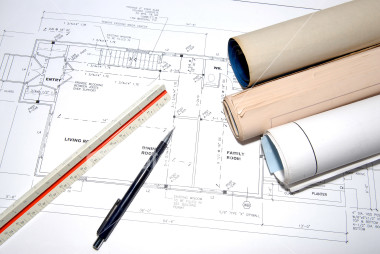 Well yesterday, after 2 hours and around thirty signatures each on countless originals and copies of various documents and plans, our project for the refurbishment of the house has been submitted to the Comune. Over the last few weeks our Italian vocabulary has been increased to include words such as ‘trincea’ (trench), ‘intonacare’ (to plaster), ‘soffita’ (loft space) and ‘trave’ (beams). But we’ve been very lucky to have found a ‘geometra’ who, although he speaks very little English, has bags of patience to allow us to ask all the questions we need to understand each process – and you know how much we like to understand each process!

I’ll take you through the stages so far :

The test hole happened a few weeks ago – one of the ‘geometra’ arrived early one morning with the ‘geologo’ – the woman in charge of all things, soil, clay and rock based in our area. We were having the test hole dug to determine the type of soil we have so she could calculate the best position and correct specifications for our ‘fossa biologica’ – or septic tank. We were also joined by Bruno from a nearby ‘Agriturismo’ who arrived in a flatbed truck with his excavator on-board, the idea being that he would trundle his little machine up into our field, dig a one and a half metre deep hole roughly where the ‘geologo’ thought would be the best place for our future trench, she would take some photos, look at the soil make up in the hole, Bruno would fill it all in again and everyone would walk away more informed, ready to work on some calculations and, in our case, a few euros lighter. 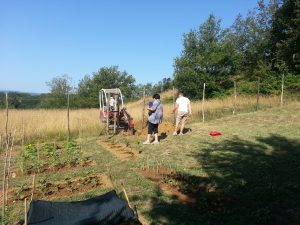 Bruno set about digging the hole, but around a metre down he didn’t seem to be making any progress … having had an exceptionally dry Summer the ground was like rock and he was struggling to get the teeth of his bucket to dig into the solid soil. Marcus, with a burst of energy unusual for this early on a morning, jumped into the hole and, with a metal bar and a pickaxe, loosened enough soil for Bruno to get a little deeper. This happened three or four times until our ‘geologo’ was happy that we were deep enough for her to take her samples and photos, then Bruno quickly filled in the hole whilst Marcus had a well-deserved rest and a couple of very large glasses of water.

We then took the ‘geologo’ to look at the far side of the house where we are hoping to build a wall to join the main house to the ‘fienile’ to create one building. She stood there open mouthed for a few seconds before declaring this ‘un paradiso per un geologo’ and took out her camera to take a few more photos. Our house does not have typical foundations as the whole thing is built on top of a huge shelf of rock. In fact the rear of our ‘cantina’ is actually carved out of this rock, with a couple of small niches and shelves for storage. With the rock being part of the structure, the whole room stays beautifully fresh in the Summer, and so we’d made a decision to keep it as a ‘cantina’ right at the beginning when we first started thinking about the design of our house. Also, it’s filling up nicely with my various jars and bottles of produce and I love that we’re using the space exactly as it was intended – although we’re using the old feeding trough to store our bottles of wine in, rather than tethering hungry animals to it!

Our geologo then returned to see us a couple of weeks ago – an impromptu visit. She arrived with her husband and parked at the bottom of our drive – we were ready to shoo them away as we thought they were uninvited passers-by parking up to scrump from our peach trees over the road but we recognised them in the nick of time before we shouted any obscenities at them! She said she was here to take some photos but we think she was here to show her husband around, after all she made a bee-line for the ‘orto’ within a couple of minutes of arriving. But her husband praised me on my vegetable garden ‘sono invidioso’ (meaning I’m jealous) and complimented us on our choice of house and position, followed by an invitation to go for ice cream one afternoon – whether she took any photos or not I didn’t see but I don’t care … I’ve got an ‘orto’ to be proud of, and we’re going for ice cream!

We then had a meeting with our three ‘geometre’ as they said they were well on with the design and just wanted to see what we thought. Normal practice, except we’ve already taken all the measurements on our own theodolite (every home should have one!), designed the house ourselves which Marcus has drawn up on a 3D program and sent them various screenshots with explanations in Italian of all the main points – if it wasn’t exactly as we’d envisaged, we were going to be disappointed! But we were thrilled – there was still some work to do as they needed some clarification on a couple of our more unusual design ideas (we’re putting the wardrobes under the eaves in the room behind the bedroom through a new doorway and we want a loft only accessible from outside). They had come up with a nice solution for the new roof which meant less building work for us, and some simpler ideas for new floors upstairs (we’re a world away from talking about carpet or laminate choices here, I mean actual floor construction with thick chestnut beams and boards screeded with a layer of lightweight concrete – a more sympathetic way to retain the wooden ceilings downstairs) so they’ve already proved their worth to us! We spent a couple of hours discussing various design bits over coffees before leaving with a bottle of wine from a ‘cantina’ they recommended and a couple of large ripe ‘Cuor di Bue’ tomatoes from their garden. I never got gifts like this from my last architect, and my last architect was my husband!

Then a phone call from the ‘geometra’ saying the design was finished got us very excited earlier this week. We joined him at his office for a couple of hours one afternoon to run through the final changes he’d made and we were very happy with it. Our next appointment with him was to call in a couple of days later to pick up our ‘bolletini’.

It’s a lovely sounding word, for a not so lovely thing – basically it’s our first lot of bills to pay towards the project comprising a rather large figure to cover the ‘oneri’. When a design project is submitted to the Comune for approval this amount needs paying up front as it is a payment charged when proposed building work is changing the use of a room or if there is a new building or extension being created. In our case we have a new outside terrace and a new building joining the house to the ‘fienile’ and we have a change of use to the two ‘legnaia’ and the ‘fienile’ itself. The calculations are a little complicated but there are basically two different costs – one for change of use, and one for new build – and they are applied to the m3 of the spaces in question. In fact our new terrace is having a solid roof of tiles to blend with the house so is technically classed as a new room so we pay the higher value. If we just had a pergola type affair, with an open roof then we would pay less. However, if we went for the cheaper option we would get wet when we sat outside watching a thunderstorm – so we’re paying more for the convenience of not having to sit there with an umbrella each! 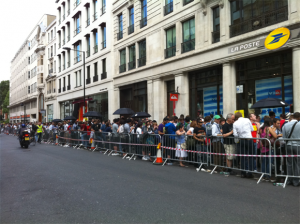 On Tuesday, with our ‘bolletini’ in hand we went to ‘La Poste’ to pay them over the counter and were shocked to find the place empty – this never happens, there’s always a queue out of the door. But I was still in there 15 minutes as the man behind the counter took this opportunity to acquaint himself with all things English – I think it would have been quicker if there were other people waiting to be served! We then called in to see the ‘geometra’ with our receipts, we signed the mountain of paperwork and the project is now in the hands of the Comune. We need to wait 30 days before starting our work on the inside and the build, and maybe a little more time to have the ‘movimenti della terra’ portion approved. Hopefully at the end of October, when the nice weather is a distant memory and everywhere has turned to mud with the constant rain we can start work! 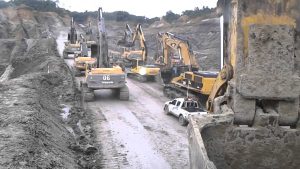 And within all of the paperwork we were able to glean the basics of our ‘fossa biologica’ design which consists of a trench 23 metres long x 120cm wide and 150cm deep. Bad news … we’re not going to be able to do all of that digging by hand, no matter how determined we are! Good news … I only lose my ‘zucchini’ bed in the ‘orto’ and I will be able to use most of the beds as they are – maybe even getting the seedlings into the ground in the right month, with the right moon, next year! However, with the amount of material that we need to remove from the trench we can’t really escape from a major landscaping project … after all there’s over 100 tonnes of soil to find space for … some enormous raised beds are sounding like a very good idea! And because it’s such a large job, we get to hire a couple of toys – an excavator for Marcus and a little dumper truck for me – there will definitely be a wacky races scenario across the field at some point!

And whilst we wait, we’re going to learn a bit more Italian vocabulary for the start of our work – phrases such as ‘It’s your turn to make the teas’, ‘Do we have to work today, it’s raining?’ and ‘How much do you think it would cost to get someone in to finish the job?’