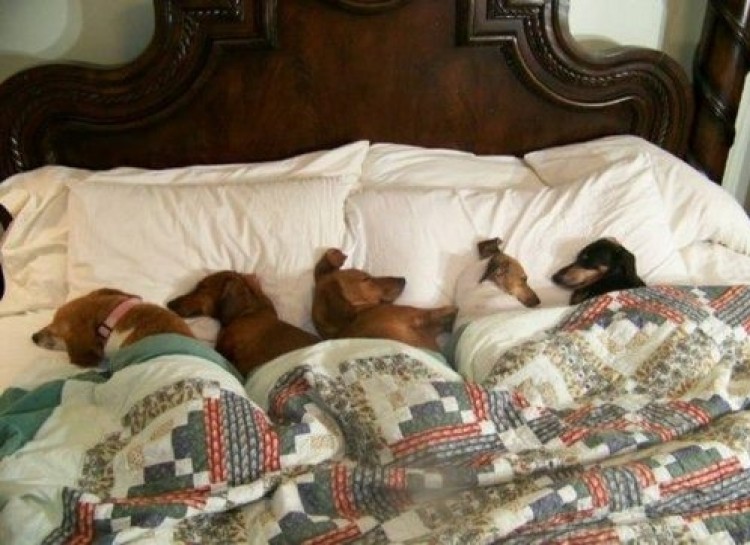 OK … who thinks we’d taken a break to breed dachsunds for a living?? No that’s not the reason I’ve been absent from the laptop for the last month or so … hard physical labour has taken priority over the writing about it but I’m back with an update from our neck of the woods, or in this case our corner of the vegetable garden! 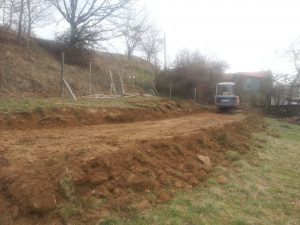 When someone says they’re going to dig over their allotment or vegetable beds then one usually imagines that a spade, a fork and maybe a hoe will be sufficient tools to complete the job. But having lost last year’s orto to the trench for the fossa and still having the scavatore on site we embraced the phrase ‘go big or go home’. We allocated the top part of our adjoining field to be the new position for this year’s produce (and hopefully many years to come) – it has a huge plus of being in full sun most of the day but in shade from around 7 o’clock on a Summer’s evening so that I can water everything nice and early between aperitivi and cena and not be hanging around until dark with a hosepipe in my hand. The downside is that it is on a slope – tiring to walk on and even harder to work on – and by the end of the growing season we’d probably end up with all of the soil at the bottom of the hill, so the first thing was to start up the digger and work on some levelling.

After a morning’s work (I use the word loosely because Marcus would jump in the digger to dig out a stray dandelion if he could) we had three very long fasce curving into the existing banking and edging the new track we’d previously created. We wanted it to look as natural as possible so set about relocating the dug up top sods to pack the bankings between each fascia. By the end of day one we had the basic structure of our orto and I went to bed with dreams of rows and rows of vegetables keeping us fed throughout the year. 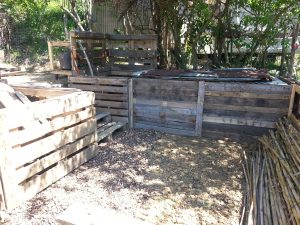 However Marcus had obviously spent the night dreaming of woodworking and before we got stuck into preparing the soil, we got to work on adding two important areas – a couple of seed benches and a compost area. We’d negotiated a very good price with a local agricola for some old pallets (€zero!) and had the loan of our friends’ carrello for a few days so we were soon up to our elbows in wood. These were quickly fashioned into four compost bins, a very grand set of steps and a storage area. The perfect place for all of our canne or natural canes which we will use to support tomatoes, beans, etc and which were cut from the side of the river near our friends’ campsite and the reason we had their trailer. Well, that and the 800kilos of wood they’d given us to store and season for use in our stufa in Winter. The seed benches were added at the top of the steps, perfectly placed in full sunshine and will be the ideal spot to set out our pots of plants before they are grown-up enough to transplant into the waiting orto. 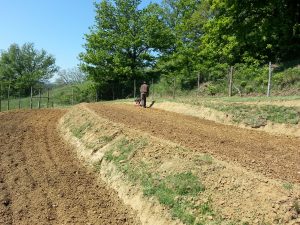 The next job was to dig over the soil on the three enormous levels (well they certainly seemed enormous when we realised we had to dig them over) – yet still the spades remained in the shed. We had treated ourselves to a little helper – una motozappa or rotivator – after seeing it on offer at a large DIY place and boy has it paid for itself already! Now you may think that using a motorised tool would be a lot easier than doing it by hand – obviously yes – but it is not without its physical side. For a start there’s the kilometres walked backwards and forwards behind this machine to ensure all the soil is cut as deep as possible, aerated and broken into a fine till. There’s the continuous vibration through your arms and chest as you hold the handles at a slight lift so the machine moves forward. And finally there’s the joy of pulling the moving machine backwards towards yourself, against its own power propelling it in the opposite direction, to tackle a particularly stubborn patch of earth. However, the pins and needles the following morning are totally worth it when you wander outside with your cup of coffee to see three beautifully prepared beds ready for the season. 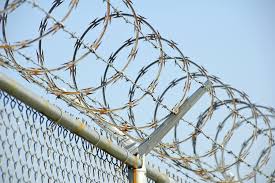 But the preparation didn’t stop there – we didn’t want all our hard work to be in vain and to have just created a breakfast buffet for the local cinghiale and capriole to feast on every morning so our next job was to put up a fence. Last year’s construction worked really well and, after a quick count up of all of the fence posts we’d removed from the old orto we were happy that we had enough for this rejig and wouldn’t need to wander up into our woods to source any more (although we really should get up there again soon as it’s been a while!) So finally the trench shovel made an appearance and Marcus set to hole digging and post erecting and I joined him to get the 1.5metre mesh in place and secured firmly to the posts. We already had two gates, but with the size of this new orto we needed a couple more access points otherwise we’d be doing many more kilometres than already necessary. My local crafstman (ie. Marcus) soon had another pair created and hung so we finally had a sealed and secure (fingers crossed) workable orto ready for planting.

Now that we had the space ready we just had to find the right time to start planting but things weren’t looking good. Last year we were late in creating the beds so everything we planted went in late at the end of May with the sun shining, as Summer was just around the corner. This time, now that we were ready with the new beds in April, the temperatures had dropped overnight to near zero, the luna calante (waning moon and the right period to plant) was coming to an end and, as the temperatures rose enough not to be too cold, we were hit with three days of heavy rain which made the soil unworkable until it dried out again. All we could do was wait for the weather to brighten up and hope that the moon would be forgiving for any wrong-doing on our part over the next couple of weeks. 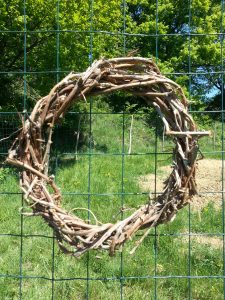 However in the midst of this very-April-weather I was at least able to add a couple of finishing touches … who says an orto can’t be decorated? With some tidying up that we’d done earlier I’d been left with a pile of branches and grape vine trimmings to shred and after playing around with one of the grape vines I created a garland. Half an hour later I’d made four, one for each gate, ready for various additions throughout the year that I collect from the surrounding countryside … flowers, pine cones, rosehips, berries, etc. Who knows, it might be my calling … Christmas orders now being taken!!