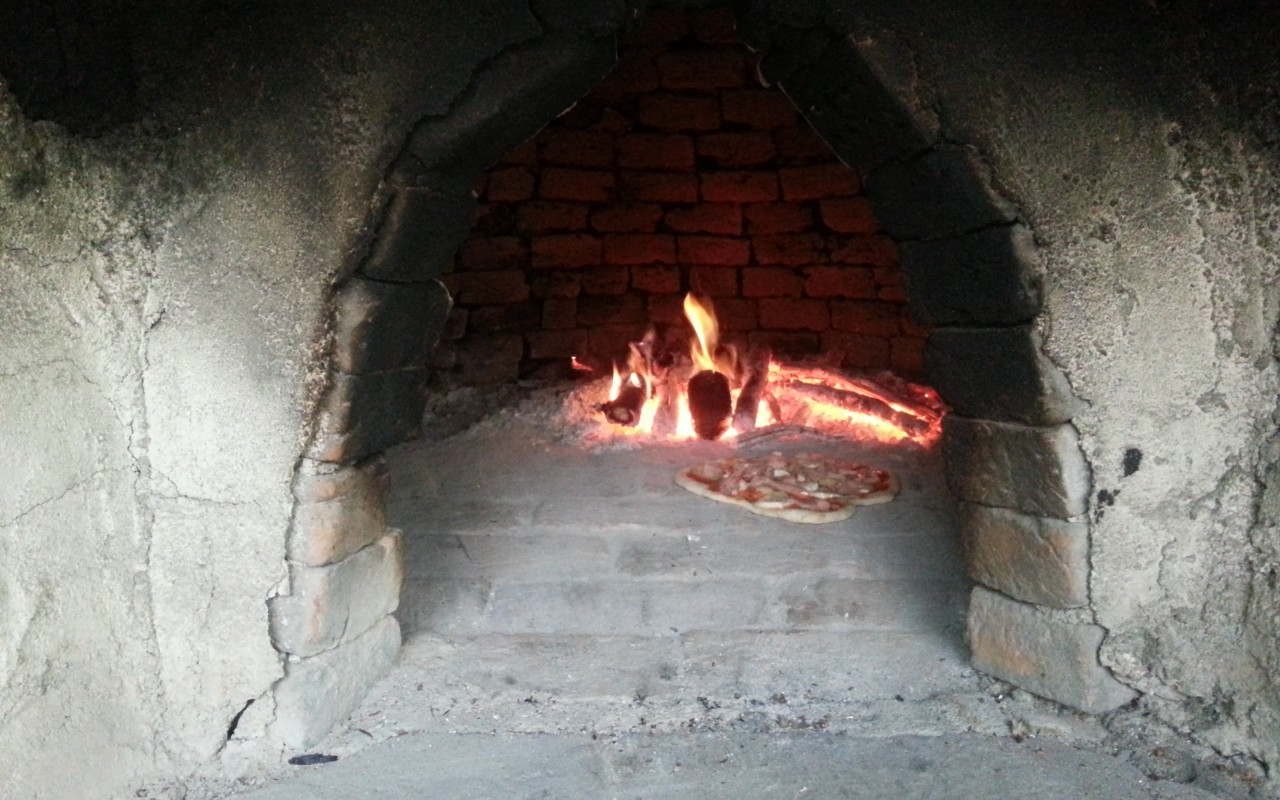 We’ve cracked it – Marcus has managed to get our outside wood oven temperature up to 475degrees Celsius – perfect for the ideal 90 second pizza cooking session! Up until now we’ve been floundering around the 200degrees mark – with falling heat, probably warm enough to thaw an ice cube, but we definitely weren’t in pizza territory. But with research, and advice from a couple of friends and a neighbour we learned that the bricks on the inside walls and the dome need to be white – only then is it hot enough throughout the whole oven and only then will pizzas be a success. So armed with half the contents of our ‘fienile’ Marcus set about making, what can only be described as a bonfire, on the floor of the oven – one of those bonfires that you went to as a child with your parents, organised on open communal ground with St. John’s Ambulance and a couple of firefighters in attendance – good job we’ve got a couple of acres of our own woodland to go at for the next one if he’s using that much wood each time!

But only half an hour later there were corners of white on some of the bricks, and with some very nifty shifting around of the fire on the oven floor (he’s obviously been doing extra research of his own) and only a full hour since he lit the first piece of kindling, he whipped out his laser thermometer, zapped various spots around the inside of the oven and proudly declared his 475degree Celsius achievement. A celebration was in order – but with it being mid-afternoon, and no meat in the fridge or pizza dough ready, what to do, what to do …? I had a lightbulb moment, raced into the caravan and returned with … a pack of marshmallows and a couple of wooden skewers, bought for such an occasion and forgotten about by my husband. We’ve roasted marshmallows many times before, in fact we even introduced the gooey loveliness to our three godchildren at a barbecue once. You know when you get to the time where you’ve cooked everything – eaten meats throughout the evening in varying degrees of warmth from ‘just cooked if you don’t eat the pink bits’ right through to ‘cremated’ and you daren’t smile as you know your teeth are black. And when everything is finished, the coals are at the perfect heat to start cooking, but you’ve run out of food so the kitchen cupboards take a bashing as you search for something else to throw on to the flames – although you’re full and can’t face chocolate stuffed bananas. Marshmallows will always be useful in this situation.

But the joy of 475degrees Celsius does not allow for the joy of a melting marshmallow on a ten inch long wooden skewer, not without losing the top inch of flesh of your fingertips anyway – we couldn’t get near enough to the fire for the desired effect! So we ended up getting very creative with a couple of bamboo canes and some tie wraps from my potting shed and were able to enjoy our melted marshmallows at a safe distance – our new contraptions worked well until the plastic tie-wraps melted and we lost a couple of good marshmallows to the flames! But we roasted two or three each successfully and neither of us ended up with second degree burns on our mouths as we bit through the crunchy black exteriors to the melted white goo inside. We decided to throw a couple of potatoes in foil onto the embers, not a degree of heat to be wasted now that we know what we’re doing, and as we sat watching the evening’s sunset I noticed Marcus looked a little different. ‘You’ve trimmed your eyebrows’ I said. ‘No I haven’t’ he replied, running his fingers along them and trying not to laugh. ‘475degrees is very hot you know, especially when you’ve got your head inside, checking how white the bricks are getting …’